It's important to remember that your life is like freshly fallen snow. Every step you take, shows.

He is absolutely cock on about the mandalorian chick, my reaction was pretty much the same when I heard of this "outrage".

Your reaction was to applaud her firing due to your outrage over her having made a comparison to Nazis. This has actually been your reaction consistently right up until I posted this video.

No it actually wasn't, snowflakes like you just interpreted shit into what I was saying (some of course deliberately), I later even specifically clarified that I personally didn't care about her views when choosing what to to watch for my personal entertainment....

The only argument that I made that was somewhat in favour of the company sacking her was that she possibly may have had some sort of contractual obligation because of her representing the company but that of course was only speculation.

I find her statements disgustingly dumb and inappropriate, though, that is correct.

You're right..her views about not dehumanising people based on their political views because it leads to things like the holocaust....how could she possibly say that people that think differently to you could some how be human?

Yeah, you're a fuckwit.

No you're actually painfully transparent right now, like you were when you were posting here as Super Friends. You can see how badly your take was received even by those you rely on to give you your thoughts and opinions and are now attempting to shift and rewrite your past so you can occupy a present with better optics. You are only concerned with how it looks, not what it is - this applies to yourself as well.

Again; Super friends wasn't / isn't me. Unlike you I don't take this site and my involvement in it seriously enough to create a sock.

My comments on this issue are all still there as once replied to they can't be edited.....

Maybe you should find someone to read them to you and then give you your opinion on them.

Here's what you lead with in the other post:

''Alt right Snowflake compares herself to holocaust victims, gets fired by employer of a predominantly jewish industry......

Who would have thought they'd take offense?

You called her and anyone who agreed with her 'Alt right' which is a euphemism for a white supremacist.

Now you would have us believe you are indifferent towards white supremacy?

Your further go on about the 'far right' in your comments.

You smug fuckstain, you are using words and terms you dont even understand.

You are embroiled in provocative retoric you dont have a handle on, and then try to gaslight people who dont agree with your outlandish comments.

Cesar Millan needs to teach you to stop shitting everywhere.

ow you would have us believe you are indifferent towards white supremacy?"

Of course I am not, you shouldn't be neither. I am not surprised so many are, though.

The alt-right is a synonym for the far right, without the mandated religious "touch" and somehow less jew hate biased (if it suits them), nothing else. IMHO it was a term created by the young far right population to disassociate themselves from white robes.

The beauty is what you wrote in inverted commas is actually exactly my initial comment, nothing else.

You snowflakes are so easy to fuck about with, especially you are a very easily triggered "nsjw" and actually quite a bit too low hanging fruit!

If you didn't dye your hair red already you should hurry to do so! 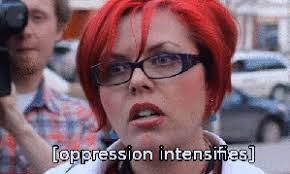 Well, if she isn't a "Karen" who actually is? Karen is a derrogative term for dumb / demanding women and a meme for white women uttering racist slurs. The young lady fits both as I later stated in my reply to bobo (whom I then still took seriously):

"Alt right Snowflake compares herself to holocaust victims, gets fired by employer of a predominantly jewish industry......

Who would have thought they'd take offense?"

I personally find the comparison hillarious*, tasteless and extraordinarily "snowflakey" dumb but would watch something I find interesting with her in it (Deadpool seems the only movie worthwhile, though).

I enjoy movies or series featuring Roseanne Barr, Tom Cruise, Mel Gibson, Ben Affleck, Tim Allen and others although I don't share their particular religious or political views. I very rarely pay for such entertainment, though.

I must say, though, in contrary to many, many other statements categorised by some jews as "anti semitic" I would say this actually does fit the description.

I can understand why they sacked her, as explained above, but I somehow doubt that this was the only reason.

*In the sense of: "Look at MEEEEEEE, I'm an entitled prominent white Karen and feel SOOOOOOO discriminated against! HEEEEELP MEEEEEEEEE". An attitude which has become quite fashionable recently within the far right."

Hoist with his own petard.

The sad thing is you think that ^^^^^ was an argument or a defense.

The more you say or repeat yourself, the more you are expose how twisted you are.

Who am I to stop you digging the hole deeper?

You and your alt right buddies on here take yourseles way too seriously.

When someone puts the mirror to your faces you get so hillariously offended:

Whilst those with more than 3 neurons:

Maybe we should start with what is your definition of "Alt Right"   --- A Hillary Clinton term made up by her people to have someone to fight, that became inbraced by morons to troll the left. That is what I think.

I am not sure who created the term but I most definitely remember fullauto commenting at least once he was "definitely alt right" a few years back, last time I challenged him on it he denied this, though.

I don't think the left needed a means to divide the far right any further. I just use the term because of the above.

Fullauto hasn't posted here in I think almost a year, and when he made that comment it was in late 2015 when the term alt-right was just emerging and its definition was unclear. Many believed it was simply a moniker indicating a conservative alternative to the standard "right" paradigm. Then, the far left perception apparatus kicked in and labeled "alt-right" as "ethnic-exclusionism" and it happened at a time when most of us still weren't ready to believe the mainstream media was completely compromised, and as a result the tactice worked. Actual ethnic-exclusionists proudly proclaimed "Yeah that's what alt-right means and I'm alt-right" and "Alt-right" became a label applied to those who have ethnic-exclusionism in their belief system - the label was applied to the torch idiots and the Spencers of the world, it stuck, and everyone who did not identity as they do excluded themselves from the definition.

Understand this - when you call someone alt-right you are saying that the person is an ethnic-exclusionist. You are saying that they are a Richard Spencer type person. What is the point of even trying to communicate with anyone here if the syntax you are using is based on some secret personal dictionary you have stored in your head attached to FullAuto, a Spiked National who is NOT EVEN alt-right and hasn't posted here in months? Stop doing it.

Not exactly. I've researched the topic a bit and the most accurate history of the actual Alt-right that I've found thus far is presented in this Tablet article. In short, it began life as a paleo-conservative movement that eventually morphed into a suit-and-tie white identitarian/supremacist ideology. For reasons unknown, the term began to gain popularity amongst younger Right-wingers that were sick of establishment Republicans sometime around 2015, and this artificially expanded the Alt-right classification to include those types, as well as the racist dipshits (this led to an uncomfortable realization by some on the Right). From that point on, Leftists have used the term as a cudgel against anyone who "dares" question the Woke religion.

That is a bit rich coming from you isn't it.

The question was: "What is your definition for the alt-right"

Your answer was deflecting at best as you try to change the subject to a different member of spiked. Yup, pretty straight forward question, wasn't even any wrong answers, literally asked you for your opinion on what a term "alt-right" meant to you.

The replies used to tick off to the right ever so slightly until we broke it with a reply thread that became unreadable, although I did like that better, as conversation was easier to follow.

DC: Im not offended that you are an idiot.

You yourself are the joke if you thought for a moment that I put any stock in what you say.

You are simply absurd.

Still you get agitated about it. Mission accomplished, I'd say!

Why do you think I keep coming back?

You are my favorite entertainment at the moment.

The classic liberal moron who just can't undertand why the beast called the Left is being eaten by its own asshole.

And then he pontificates his virtue and wisdom on the subject.