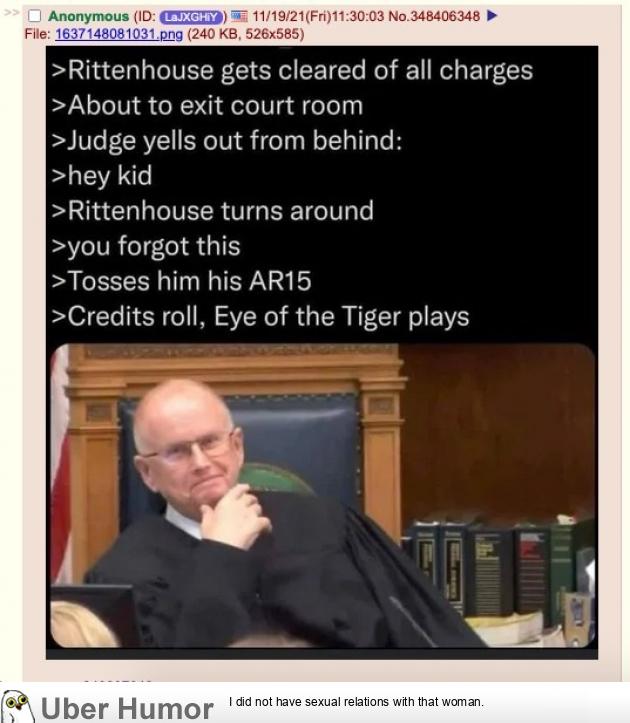 In case you had any doubts about what their objective was:

1. Rittenhouse’s case was about self-defense. And it was hard to argue against.

While our national conversation among liberals often centered on the Rittenhouse trial as a matter of racial justice, the crux of the legal battle was whether the prosecution could prove beyond a reasonable doubt that Rittenhouse did not act in self-defense when he fired his shots, according to Barbara McQuade, a professor at the University of Michigan Law School and former U.S. attorney for the Eastern District of Michigan.

As she explained in a column for MSNBC prior to the verdict, that that was a very high bar to meet under Wisconsin’s vaguely worded law:

Under that law [Wisconsin’s law of self-defense], deadly force is permitted if a defendant “reasonably believed that the force used was necessary to prevent imminent death or great bodily harm to himself.” Reasonableness is to be viewed based on “the defendant’s position under the circumstances that existed at the time of the alleged offense.”

Generally, someone who provokes an attack is unable to use self-defense, but Wisconsin law is a little more generous, even contradictory. It provides that a “person who engages in unlawful conduct of a type likely to provoke others to attack, and who does provoke an attack, is not allowed to use or threaten force in self-defense against that attack.” That prohibition would seem to apply to Rittenhouse, whose alleged illegal possession of a semi-automatic rifle provoked others to attack him. [After McQuade wrote this, the judge dismissed the illegal possession of a firearm charge since under Wisconsin law 17-year-olds are allowed to possess long-barreled guns.] Even then, however, the law says a defendant may still use deadly force if he reasonably believes he has no other means to avoid death or great bodily harm. What the law taketh away, it giveth back.

In this case, Rittenhouse can argue that even if he provoked others to attack him by openly carrying his semi-automatic rifle at a mob scene, he was still able to use deadly force under Wisconsin law because he reasonably believed he had no other alternatives at those moments to avoid death or great bodily harm.

What this means is that the jury wasn’t rendering a judgment on whether Rittenhouse should’ve brought a gun with him to Kenosha, whether he had good politics, what precedent his behavior could set, or whether it was appropriate to cosplay a paramedic or a police officer. It was deciding whether at the very moments that he used deadly force could he argue that it was reasonable to believe he was in serious danger of bodily harm or death. And on this front, Rittenhouse — no matter what you think of him as a moral or political actor in a general sense — had a pretty strong case.

Their goal is to remove the right of self-defense from citizens. This guy envisions a trial where people are judged based on their political beliefs, not whether they were right to defend themselves. In other words, those with the wrong political beliefs need to be put in a position where wokeists can kill them freely and the right of self-defense is irrelevant. "When do we get to start using the guns?" An interesting question.
+1
0
-1
Vote comment up/down

Anybody else remember breathing a sigh of relief for the kid when they put up the photos of his 'victims' all those months ago and you saw that they were all white.

this trial was a big waste of everyone's time. this incident was so well recorded on video. you can see almost every moment of it. at most, they might have been able to charge him with some weapons violation if it had been a different judge, maybe get a plea deal and slap on the wrist. only problem with the outcome is vigilantes are going to be happy, and fake outrage people are going to complain some more.

I think he was prosecuted for his "intentions" and maybe to try and stop copycats and it is good to see they failed.

Fact is people are allowed to behave like idiots if it is within the law. What needs addressing is the law if people want to stop this kind of shit in the future.

Also fact is that the kid has to live with this for the rest of his life and if he is a halfway decent human being he will struggle with processing this.

Yeah, we need a Federal self defense/stand your ground law and right to carry law, we need to stop these sort of prosecutions in the future.

Whatever the desicion it just needs to be clear cut. ATM regulation favours some people's ethics, which probably isn't even the majority.

One could hold a referendum like they did for brexit and decide on the outcome. Now that would be democracy, literally.

Except we arn't a democracy. We are a constitutional Republic.

A republic lives as long as there are people willing to protect it.

A referendum will do nothing to disarm the population. Only bodies. There is no other way.

60% of total counties in the United states are 2nd amendement sanctuaries.

Gun control is receeding no longer growing in the U.S.

Ok I got it! If police abandon the citizens and allow criminals to go unpunished then vigilantes cannot be charged!