Here children we see an prime example of exactly why you don't ask cops about gun laws.

Speaking of the pistol, I have that same lower, only I actually jumped through all the hoops, paid a dumb ass tax from 1934 and then waited 8 months to receive a fucking stamp to put a legit rifle stock on my 9mm carbine.

The cop did have a point.  It would have been a decent idea to give them a heads up you'll be opening carrying a non-standard pistol in public.  You never know if one of the cops responding is going to be cowardly bitch like Phillip Brailsford and plug your ass for no good god damn reason.

Sal9000 I don't know if you're from the US and up on the absolutely retarded firearms classifications that resulted from gun grabbers getting their way in 1934 but here's how it works.

The term “Pistol” means a weapon originally designed, made, and intended to fire a projectile (bullet) from one or more barrels when held in one hand.

You will notice that there is no mention of barrel length, size, shape, or weight.  The firearm needs to be "originally designed" to fire a bullet when held in one hand.

That is why you cannot take an AR-15 built and sold as a rifle and configure it as a pistol, it was no originally designed as one.  You must purchase it configured as a pistol from the factory or buy a stripped lower receiver and built it as a pistol yourself.

What does this mean in plain language?  NO stock and NO special vertical grip under the barrel.  Adding a stock changes the classification to a rifle.  Adding a verical grip to aid two handed shooting changes the classification to an AOW, which requires a stamp.  Any firearm with a stock may not have a barrel shorter than 16 inches as measured from the bolt face in the closed position without being registered with the ATF as a "Short Barreled Rifle".

If all of this seems retarded to you then welcome to club.  You have to realize that had the gun grabbers in 1936 gotten everything they wanted, ordinary pistols would have been included as well.  Instead they gave up pistols and decided to demonize suppressors, which are nothing more than earing protection devices.

Gun grabbers are a feisty and old species.

Here's an exmple of an AR Pistol with an SBA3 brace.  The difference is mine is 5.56 and not 9mm. 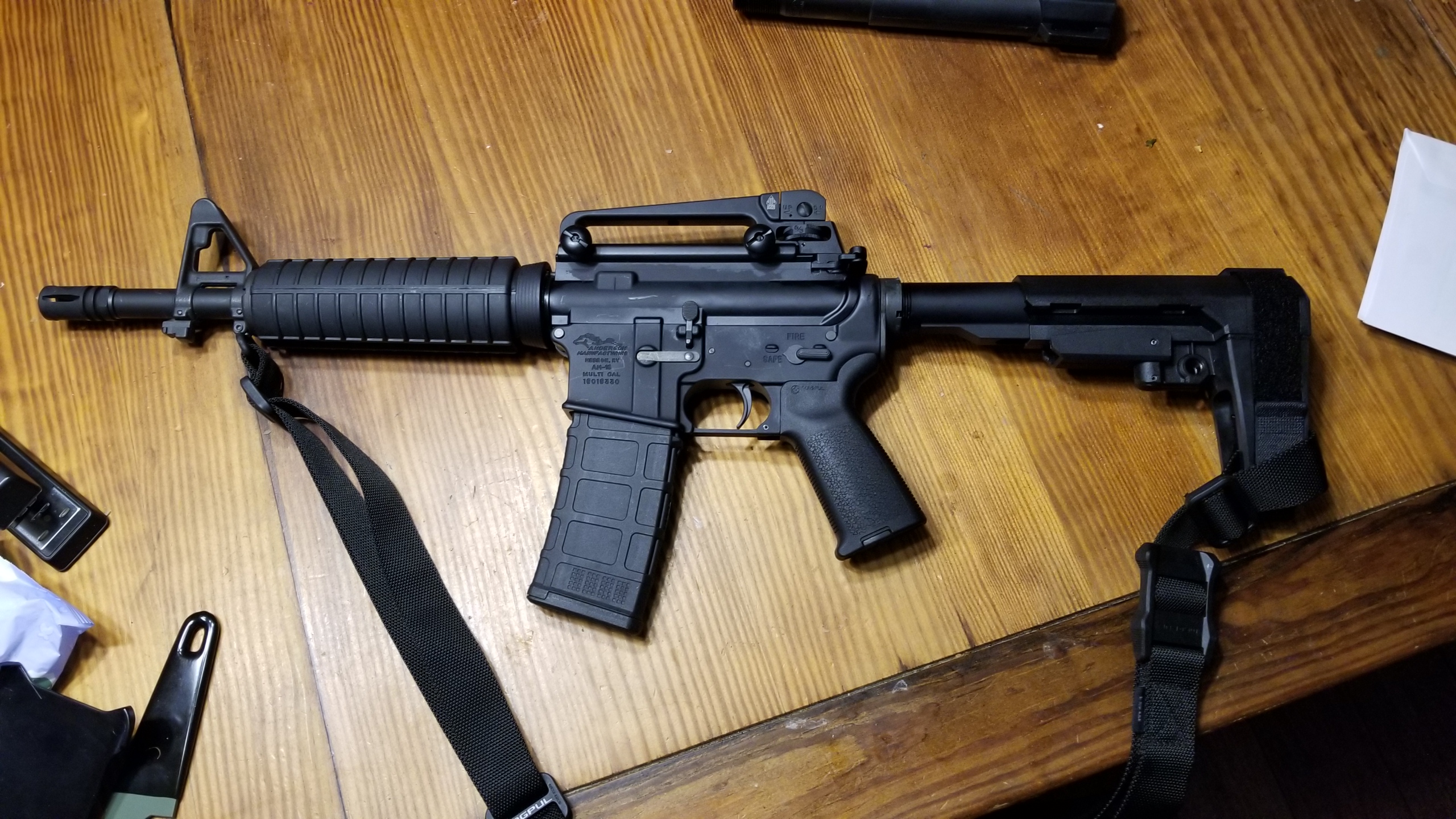 Here is an example of an registered Short Barreled Rifle in 9mm.  Notice the Magpul rifle stock and vertical grip. 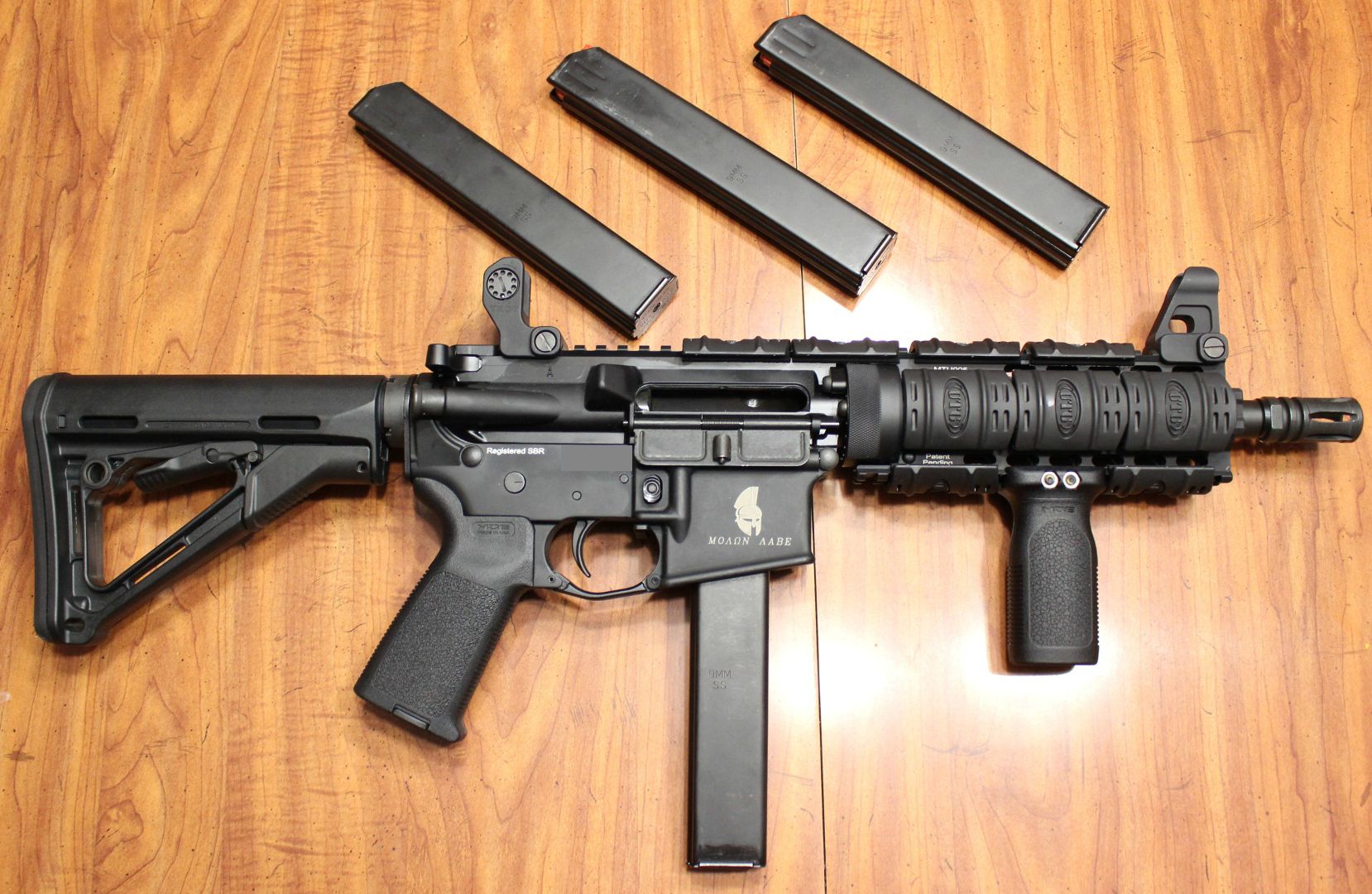 This what the Stamp looks like when you receive your paperwork back from the ATF. at what point was a gun like that classed as a pistol?

guy says so multiple times. barrel length under 16 inches and that "brace stock". in a nutshell the configuration is side stepping certian restrictions to be legal.

The barrel length being less than 16 inches is irrelevent as that limitation applies to rifles.

wait, so you can have an "ar15 pistol" with a 24 inch barrel (without attachments such as a suppressor or compensator ect.)?

i'm only asking because the guy was fairly clear that his "pistol" was under 16 inches making it seem like a requirement.

i know the guy says so multiple times..i saw the video..you misunderstood my question...'at what point' meaning when did this classification occur? im no expert so i ask questions ..are these new 'laws' or does someone have to lobby for this kind of classification in the US or what? seems strange that a big looking gun could be classed in that manner.

It was classified as pistol from the moment it was constructed.  It meets the definition of a pistol as proscribed by law.

The term “Pistol” means a weapon originally designed, made, and intended to fire a projectile (bullet) from one or more barrels when held in one hand...

As opposed to a rifle...

excellent thanks for that..

At the risk of sounding like I don't like guns/anti gun. A gun looking like this and saying its a pistol is like pointing out that the South African elephant and the Saharan elephant are different. But it doesn't matter a damn when their trampling you

That's fine.  The simple way to fix this would be to repeal the pointless law that drew these arbitrary distinctions in the first place.  It shouldn't matter how a firearm is held, it's just a firearm.  The barrel length shouldn't fucking matter.

Not sure if it's wise to carry around a gun that cops freak out over at first glance. You could be somewhere a crime's being committed, what's the first things the cops are gonna do when they pull up - politely ask to see your gun rego?

Considering some of the absolutely retarded poicy ideas I see you write in the comments, you are the last person any should look to for advice on "common sense".

Daftcunt: Let's make it a law to require criminals undergo a background check that will deny them weapon sales.

Daftcunt: OK, if we just pass one more law maybe those pesky criminals will finally get the message.

Funny how in about every country in the world that has stricter gun laws "gun crimes" are way less than in the US.

Keep it simple. Let people buy any weapons and let it work itself out. I'd grab a M203 PI underbarrel grenade launcher for my G3. Definitely make for some great police shootout video if they proliferate. A Carl Gustaf recoilless rifle would be cool too. The pesky neighbor population nationally would drop.

People should be able to have any gun.

In canada they are now trying to illegalize hand guns :( Nazi regime is coming