Japan's WWII atrocities were worse than the Nazis' but covered up by the American government in exchange for the research.

Unit 731 was an infamous horrific research facility in Harbin China. What's hardly known is there were 4 other facilities like it in China.

Japanese don't learn about any of this in their schools & the government still officially denies what they did just 75 years ago. 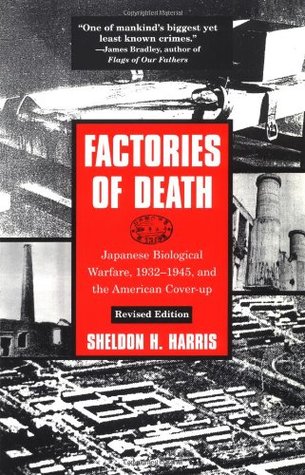 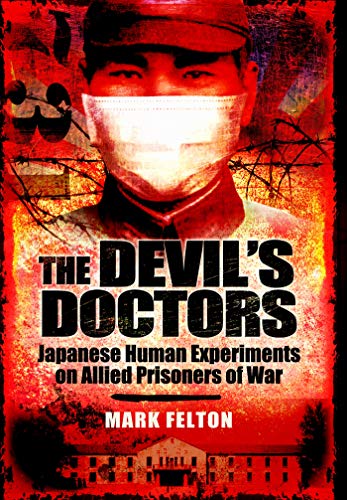 terrible yes and they still deny it all yes, but worse? i dunno. are human experiments conducted in facilities around asia (not just china, and including in the japanese homeland) worse than the wholesale extermination of millions?

and to get on the "whatabout" bandwagon, whatabout the tens of millions killed by the moronic policies of the great leap forward?

yes that happened and yes japan still denies that among other things, but worse than the nazi's? i dunno. is conducting human experiments in facilities around asia (not just in china and including in japan too) worse than the industrial slaughter of millions?

and then to get on the "whatabout" band wagon, whatabout the tens of millions killed by the moronic policies of the great leap forward?

it's a good debate really. the japanese experiments killed only individuals rather than entire families but in arguably more horrific and torturous ways. the nazi's genocidal policies were vastly greater scale but quicker in thier violence, and the chinese extermination of tens of millions was "their own" people and out of incompetence rather than malice.

We can take the GLF off the table, it wasn't a deliberate policy, it was famine induced by natural disaster exacerbated by economic hardship (a result of the Japanese invasion & other factors), bad policy & incompetent bureaucracy in a regime only a decade old. It wasn't the first famine there (they had 3 in the 2 decades prior to 1949) but it was the last. The fact you'd bring that up doesn't bode well for this convo.

Yes, worse than the Nazis. The Japanese did worse things to all other nations they encountered than what the Nazis did to the Jews. The Nazis mass-slaughtered Jews, yes but not on the scale of the Japanese mass-slaughter of Chinese. They killed 20-30 million Chinese using every technology at their disposal, including deliberate famine, germ warfare (anthrax, plague, cholera, etc) against the civilian populace.

The Japanese showed zero humanity towards all non-Japanese consistently during their short-lived empire. Germany was a signatory to the Geneva Conventions & treated POWs as good as any other nation did during WWII.

The human experiments conducted by the Japanese are also far more gruesome & on far larger scale than the Nazis did. They're basically incomparible. We could continue but I think that's enough unless you want to keep arguing the point.

We could talk about enslaving women & children into sex-slavery, the Nanking massacre of ~300,000 civilians over six weeks, the horrifying acts of cruelty within the Japanese POW camps, or of course Unit 731 & the 4 other facilities like it where they conducted their "research". It's probably best not to go there because that shit's all pretty gross.

so do you want to blame the japanese for over 1800 famines in china and the lose of over 100 million people or that maybe china has shown a history of being unable to feed its own people for more then a few decades. china took a 200 million dollar lown from japan in the 70's. billions in foreign aid in 1999, 2001 and 2003. guessing another check is due soon

China has a history of 1 famine per year for the past 2,000 years. That's my point about the GLF. It was an epic disaster but wasn't deliberate or altogether unsurprising. It was still a monumental fk up. When I say Imperial Japan was "worse" than the Nazis in WWII it's coming from a moralistic view really so there's no way to difinitively prove it. I think any reasonable person when given the facts would agree though.

I'm not sure why you're talking about post-war economies but we can discuss that. I have to lookup some details to understand the foreign "aid" to China better but the big picture AFAIK is that Japan was basically let off the hook rwt war reparations while Germany is still paying 400 million per year to Israel & has in total paid around 90 billion to the Jewish state in today's USD. On top of this West Germany was ordered to pay 23 billion to the allies in 1945 USD. I dunno how much they paid of that.

Japan's economy was fast-tracked for decades with sweetheart loans, trade policies & tech from the US, so much so that they had to implement the Plaza Accords to slow it down. China's problem in part was that it was allied with a devastated USSR but it received barely any help at all to recover from WWII, not from Japan or anyone. Just a few billion from USSR over the first decade AFAIK.

I'll get back to you about the foreign aid from the US in the 90s etc.

Japan gave nothing to China for war reparations & wasn't ordered to.

When their relations finally normalised in 1978, China borrowed 220 million USD from Japan for infrastructure development. It looks like Japan agreed to cough up 30 billion USD which was finally used by China in the 1990s.

USAID is mostly an influence spreading operation. If you look at where the money goes, it's largely about hooking into China's system. It's not a handout to the PRC govt.

Gonna look into it more.

maybe get your shit together and post in one post instead of snail trailing it, and i dont know why you would bold the borrow when i said it was a lown(loan) in my post

China didn't "take" billions of dollars in 1999 etc. The US Congress granted the money to USAID under the guise of development programs in China. In a rival like China the money gets used to undermine the governance in the target state.

One of the roles of USAID is to make regime change operations look like a humanitarian cause just as the NED is used. There's reasons USAID is banned in Russia & sanction in China, it's not because they don't want free money.

the comments before the edits

"if you would stop replying I'd be able to whittle it down better. You're not even responding to the topic, we were disgussing wartime atrocities & you bust in talking about the fucking economy. Get your shit together & follow the thread."

"Your statement was incorrect.

China didn't "take" billions of dollars in 1999 etc. The US granted the money but most of it went to US companies, like most grants going through USAID."

"In 2001 it received US$1.4 billion in foreign aid, or about US$1.10 per capita. This total was down from the 1999 figure of US$2.4 billion, or US$1.90 per capita. In 2003 China received US$1.3 billion in aid, or about US$1 per capita. Like other countries in recent years, the United States has rapidly lowered foreign aid to China, reaching about $12 million from USAID for 2011.[1] The aid goes to Tibetan communities, rule of law initiatives, and climate change policy.[1] In 2011, an aid package amounting to $3.95 million and designated for climate change was the subject of a critical Congressional panel hearing titled "Feeding the Dragon: Reevaluating U.S. Development Assistance to China".

Some of this aid comes to the People's Republic of China (PRC) in the form of socioeconomic development assistance through the United Nations (UN) system. The PRC received US$112 million in such UN assistance annually in 2001 and 2002, the largest portion coming from the UN Development Programme (UNDP)"

that's other countries injecting money into china's system so they can spend there money somewhere else. like food.

not sure you can say that the famine during the GLF wasn't deliberate, they used farming methods employed by the soviets that resulted in a famine in the 1932-33 the resulted in 6 million deaths.

No comment about how USAID isn't actually given to the target country?

The prior famine wasn't during a civil war it was in 1942-43 during the Japanese occupation. The civil war was paused in 1937 so both sides could resist the Japanese. The 42-43 famine was a result of a devastated economy & the KMT's stupid scheme to use flooding to stop the Japanese advance. (the KMT is the losing side in the civil war that the US supported & ended up running away to Taiwan with most of China's treasury, CCP took control of China in 1949).

If you put famine mistakenly caused by natural disaster & bad governance on the same moral standing as deliberate atrocities like multinational programs of systemic rape of women & children, live human experiments, deliberately spreading famine, germ warfare like anthrax, plague & cholera that killed up to 200,000 people per WMD, mass slaughter of hundreds of thousands of civlians in a single city with "games" to see who can behead the most people, etc.... then that's where this conversation ends. We can agree to disagree.

Why do you suppose Russia kicked USAID out of their country?

The famine was of 1928-1930 was in Shensi, Honan & Kansu, none of which were under control of the central government in that period.

It was a time of a broken China, with warlords running most provinces & a civil war raging & the famine was brought about by drought & poor infrastructure. [link]

What's the point you're trying to make exactly?

- that when a state is collapsed & has a civil war going on, after decades of foreign aggression & 2 revolutions, it experiences drought & famine where millions die, then the state that's formed afterwards under a whole new regime is the morally worse than the Nazis or Japanese in WWII? 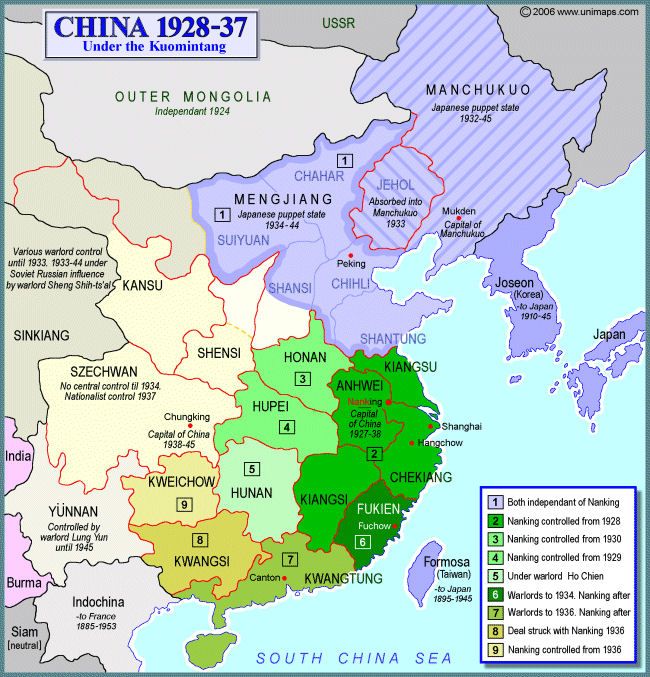 This stuff happens everywhere, look at Raccoon City, Wesker released the T-virus there millions where eaten by zombies and other creatures