Look at a map & tell me how likely it would be for Iran's AA to misidentify a plane taking off in Tehran for a foreign hostile aircraft. Have a think about speed, trajectory & altitude. This theory is beyond retarded, perfect for Tim Pool fans. 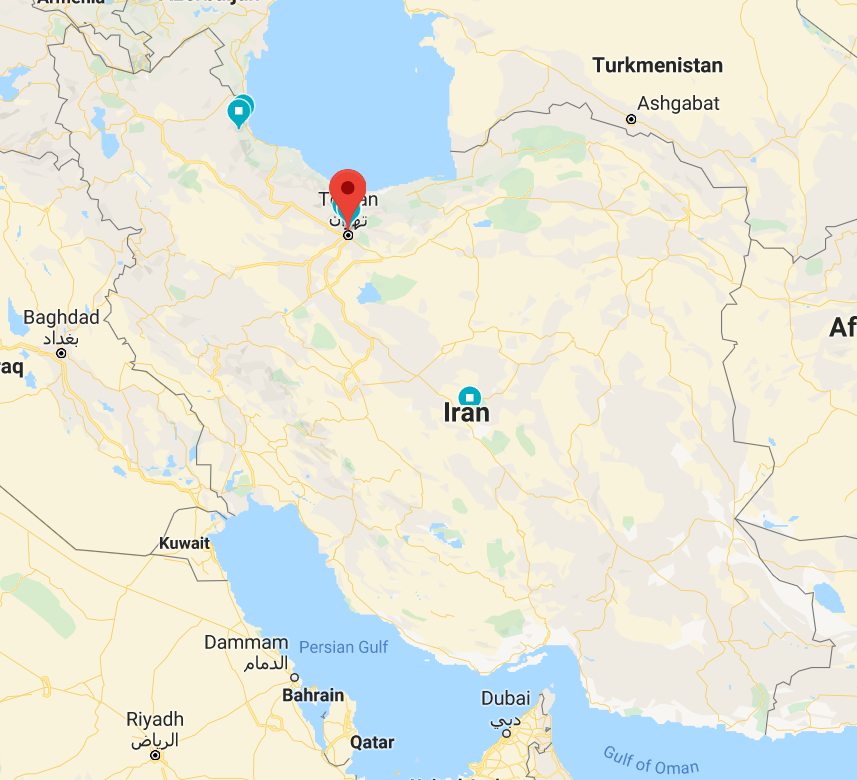 Oh man, alright, lets get it on! Boeing 737 have superb flight records, which is what this was, it was NOT the supermax 737 which they modified to save feul and which 2 of them crashed, this was the older un-modified version which was fine. Now, the plane fell out of the sky like a dead weight, they can fly with one engine out, so both engines must have failed. Witnesses and video say and show a fireball approached the plane and blew up into fire then fell. No communication of malfunction or anything, just dead. Photos show shrapnel in the fuselage consistant with anti-aircraft cluster bombing missles. So, it blew up mid-air, kinda sounds like a missle hit it. On top of ALL that it happened just hours after Iran bombed the US bases and were on high alert for incoming USA aircrafts, kinda sounds like an itchy finger on the trigger. AND yet here you are defending Iran and saying it is absurd to think Iran would ever do such a thing yet claim it absurd that Trump could have taken out a bad guy based n intel he was about to commit more acts of terrorism. Sounds like you are the one making some retarded claims here buddy. You might wanna get that head checked out I think you might have the OrangeManBad syndrome that's been going around and making so many people fucking retarded. 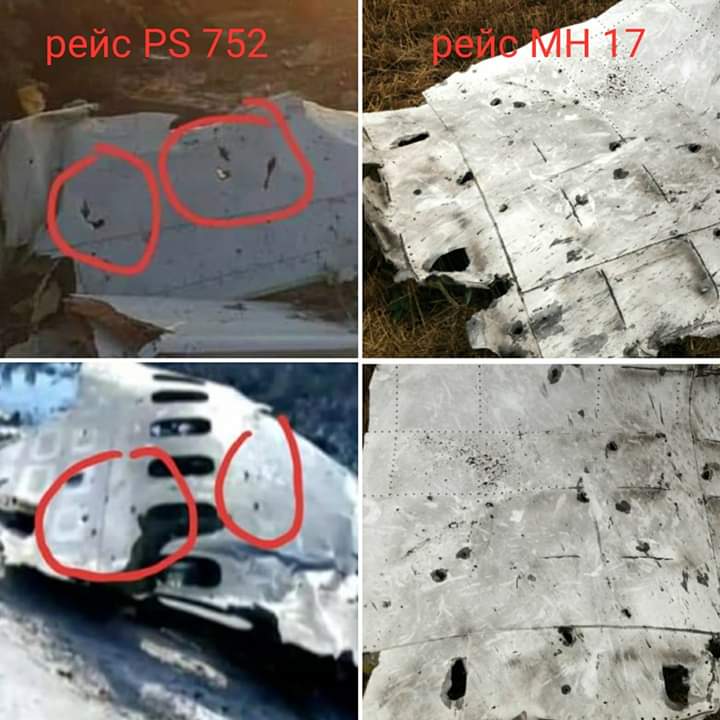 I've seen the reports of shrapnel. That & the reports of full electronic failure (if true) looks like something was detonated but my expertise on this kinda thing is almost zero. I'm not making any claims I just find it absurd that AA would be lit up around a civilian airfield away from the borders & be targetting something with the parameters I mentioned. You're the one making claims here.

intel he was about to commit more acts of terrorism

how do you know what he was about to do?

intel he was about to commit more acts of terrorism

how do you know what he was about to do?

I dont, never said that. I said Trump acted on intel he was giving that Salami was about to commit more acts of terrorism. Thats their story. I not saying it is true or not true.

Have a think about who you are asking to have a think, that may save you from a lot of typing. Unless you are bored and in for the inadvertant comedy that is......

It's just fun, don't ask me why. The callus on my head from banging it against a wall is getting pretty thick.

Here's my take based on 10 minutes skimming some info: We'll never know for sure what happened. Iran will not hand over the black box to Boeing & will conduct the investigation themselves. They're open to Ukraine being involved. Canada is pushing to be involved in the investigation but there is very little trust between them and Iran. Boeing is under pressure from its 737-Max debacle to claim this was something other than malfunction. Iranian investigation will likely say malfunction though. They may be right, we'll see.

I highly doubt the investigation will determine that it was a missile that hit the aircraft, whether it was an Israeli stealth drone, an Iranian AA missile or whatever. I've already stated how far-fetched I think it is to claim that it was a mistake from Iranian AA, given the location & other factors. I think it was irresponsible for the Iranians not to shutdown civilian airspace completely as Iraq was buzzing with US jets following the glorious slap they gave the Romans in Babylon. 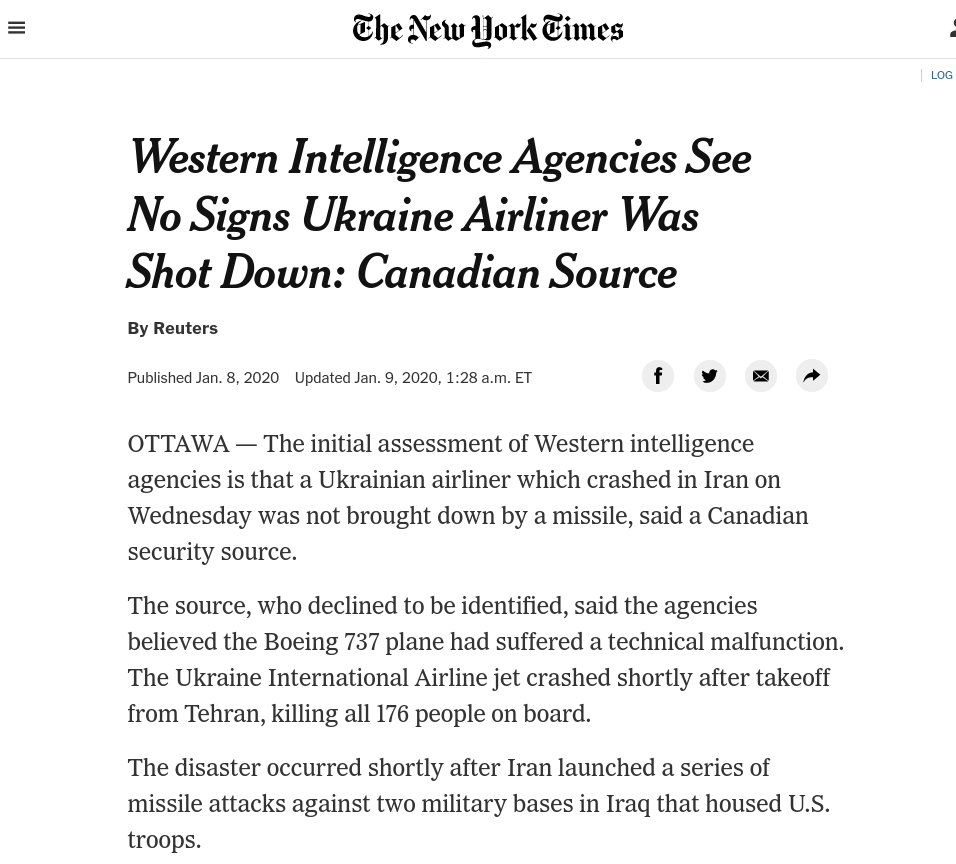 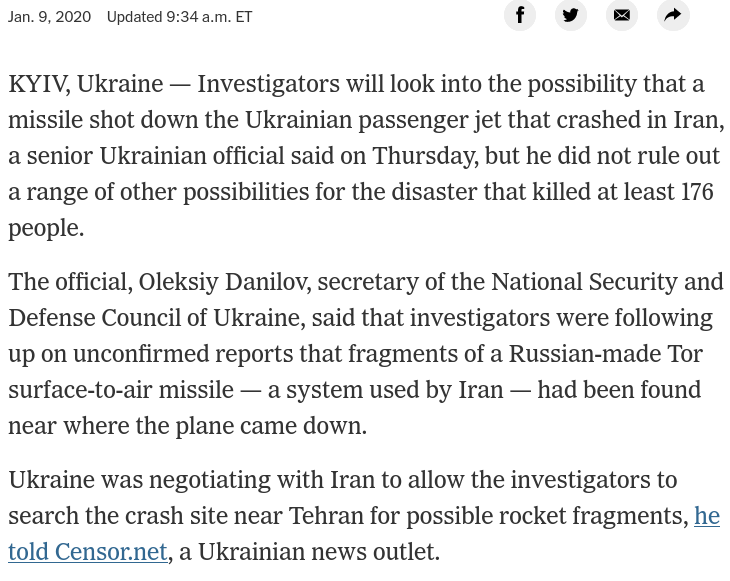 That investigation was fast! Luckily, unnamed US officials are so trustworthy, everyone can go home now. Case closed.

#BREAKING: @CBSNews has learned U.S. officials are confident that Iran shot down a Ukrainian jetliner in the hours after the Iranian missile attack on U.S. targets.

176 people were killed, including at least 63 Canadians. pic.twitter.com/g149hAcui0

Well they found the fucking missile at the crash site, so yeah! Kinda obviuos now!

Those rando photos of a missile aren't verified - no metadata or geolocation clues. Could be from anywhere. 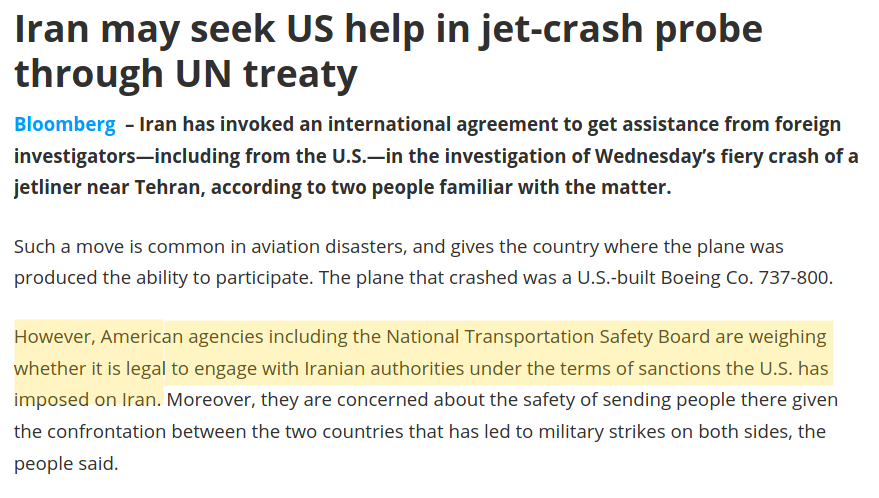 I can't find the other video I posted on, but Foxnews has it up too. So that is literally every major news site has this story and has it as the plane was shot down.

+5 for the discussion so far. It's interesting no one has taken credit for it, if it was intentional. Maybe it was an accidental attack? Do US bombers and 747s look the same in the dark.

Could be a rogue person with a rocket launcher.

Could have just exploded.

I read that Iran sent the black boxes to Russia for analysis, ( I wouldn't send them to the USA either), but if Russia comes out with yes it was a missle, ... does the US believe it, or is it some Trump/Putin love fest that doctored evidence. Then I started to think, where would the left believe the statements if the blackboxes were sent elsewhere? ... Canada? Might have been the best bet, since 68 Canadians died ( Americans, North Americans lol if you want to war about it. )

Discussion is good, i got lost and can't follow what exactly we are arguing about anymore? I will just wait for more evidence and maybe some eye witnesses, WW3 no, but I have been to Iran and they are great people, with shitty leaders. I don't want to see them blown up, I think from Trump's newest comments, he doesn't either. Which is good.