Compaction Grouting Is The Most Common Technique Selected For Sinkhole Stabilization

Some of what goes on behind Tesla's auto pilot software.

Seeing as this is the only part of the site that is still functional in the sense of having some sort of community engagement, I just want to say how disappointed I am by what Spiked has become. I don't know what part of the "upgrade" killed the site but I still remember how strong this site used to be in terms of engagement. Given that it was a youtube mirror the main reason I came here was for the comments. There always used to be trolls, but there were enough decent posters to consistently drown them out. Nowadays the trolls are still living it up but everyone else has disappeared. I don't believe they've left the internet, they just don't want to use this site anymore. Something broke on a fundamental level and it's never been fixed. The main page gets one new video - MAYBE - a month, submissions to the recent page are few, and the quality is univerally shit. What happened?

Given that the site is a ruin of its former self, why don't the people running it either fix the broken functionality, revert to the previous (entirely solid) build of the site, or just shut the whole fucking thing down? Like, why pay to keep up a site that hosts nothing of value but some weekly GIFs? Bless Tumbi for keeping that going, but the rest of the site is a bombed out shell. It's depressing.

I know plenty of people remember what Spiked used to be, and what it could be again. I live in hope that we'll see those days again. End of rant. 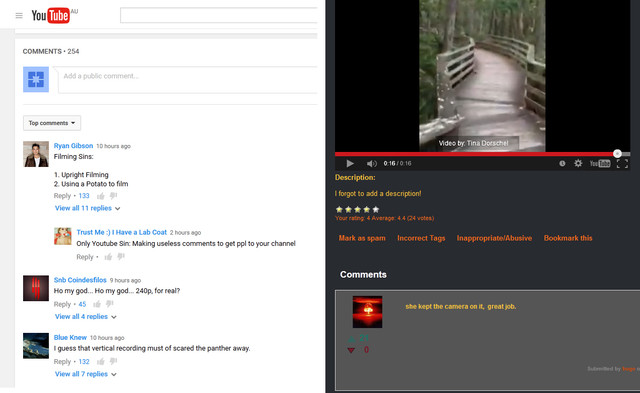 I've just been coming to this site for over... 15 years? I can't just stop clicking the link from one day to the next. I will be here until the site is either pulled offline, or it pulls a miraculous save and we become the old timers.

I rarely post any serious comments because I'm always worried someone will get up and call me dumb. I always liked that there would be lots of videos I'd never find on my own, and the comments were something fun/informative. But over the years there was the hosting troubles and a couple disputes between the owners, and more and more negativity. Arguments in every video comment section, continually increasing amount of triggering videos causing even more arguments, then a guy or thirty was pretty much going around fanning the flames? I don't exactly know what that was, just apparently someone getting banned but coming back making new names, alternate accounts and having conversations with himself I think.

It doesn't help that I lurk and do nothing helpful like participate. :x

Good rant. I'm 100% with you about missing the quality of the old spiked comments. I remember on spikedhumor it was widely felt that they were one of the main strengths of the site, and way the hell better than what you would find on youtube.

I’m not sure what happened either. I don’t think the current site is all that different from the old one in terms of functionality, so it’s probably like you said, we just lost more quality users than we did trolls. And there was a problem with negativity on the old site too, starting, as far as I can recall, around 2010 with Berg and Fullauto filling the site with volumes of ad hominems. I expect we were already losing plenty of users to that back then.

I think political discussions are fine, and I actually think it’s great that we are very far from being an echo chamber. But the problem is that 90% of the time we just have people throwing insults back and forth. Maybe it’s because people just can’t be bothered to make the effort to write quality comments that engage with the other side of the argument, and therefore fall back on the personal attacks. I’m not sure what would fix this. I try to downvote all ad hominems I see even if they are coming from people I agree with politically, but downvoting doesn’t seem to have much effect. There was a proposal some time ago to make a separate section of the site specifically for politics, but I don’t think we’ve got enough people with both the free time and IT skills to do such a revamp.

Anyway, the gifs are here to stay and hopefully the core of quality users (still the large but relatively silent majority) will stick around long enough for the trolls to either grow up or move on.

I just recently returned and found all of my history had been wiped, saw no one commenting/voting, and so decided to just come back for the weekly GIFs