Why do you support a dictator? 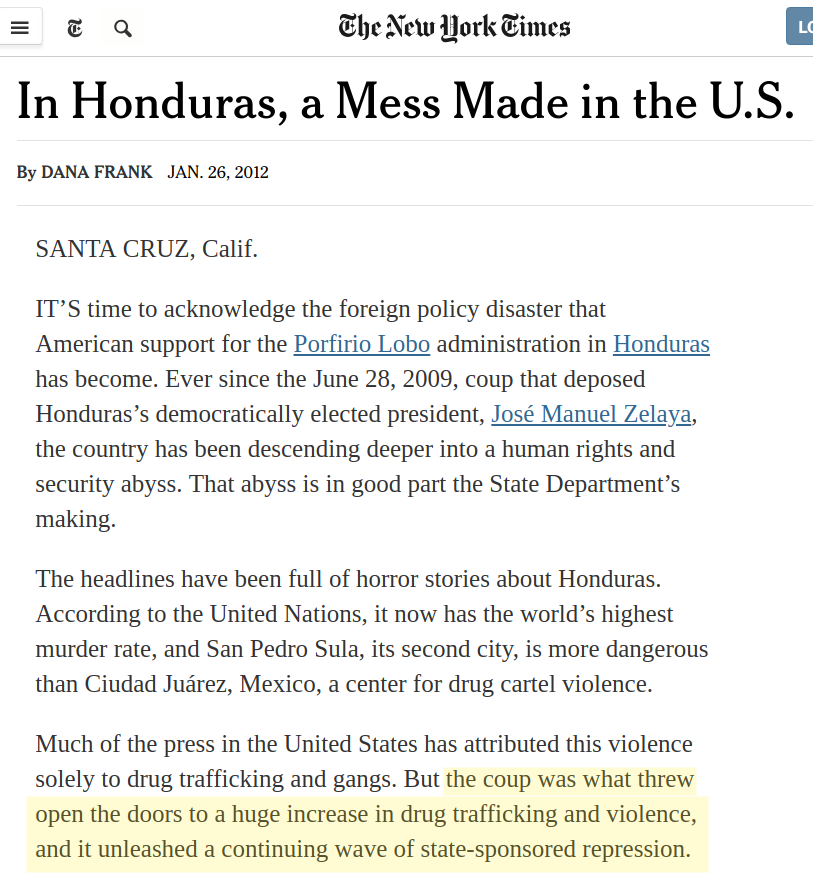 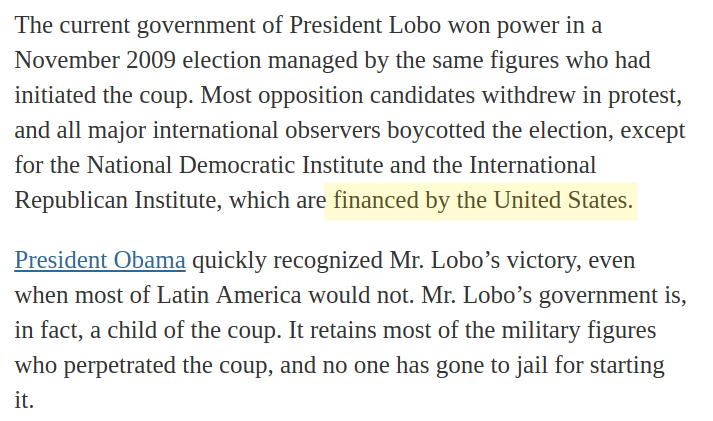 Why are you posting articles from 2012?  They've had elections since then.

BTW, the removal from office was done at the direction of the Honduran Supreme Court after Zelaya acted outside his authority.  For fuck sake, The National Congress the following morning voted to accept Zelaya's resignation letter, dated 25 June, which Zelaya had denied signing. It studied a special report on Zelaya, and by a show of hands, the National Congress – the majority of whom belonged to Zelaya's own Liberal party – appointed the President of the National Congress Roberto Micheletti, a member of Zelaya's party, to succeed Zelaya. Some felt that the president had changed his politics during his administration, from right to left, which earned him the antipathy of his party.

What kicked this all off?  It was called the "Honduran fourth ballot box referendum".  https://en.wikipedia.org/wiki/Honduran_fourth_ballot_box_referendum

Basically, he was trying to join the Communist organization ALBA and wanted the constitution altered to remove term limits.  Zelaya was little Marxist weed trying to take root.  The rest of the Government realized what was happening and took appropriate steps to remove the weed.

Zelaya was the elected president and he attempted to hold a non-binding referendum to change the constitution. He was illegally removed from office. The US even called it an "illegal coup", even though they were heavily involved (see NYTimes article above) & it was condemned by every major body in the world.

Did you even read the sentence before copy pasting it from eanswers.net?

Zelaya was little Marxist weed trying to take root
He was elected by the people of Honduras. You sound like a Neocon.

Do you believe your country has the right to overthrow the president of another country?

Cool, I love playing fill in the blank.

Zelaya was the elected president and he attempted to hold a non-binding referendum to change the constitution [ in violation of a Supreme Court order to the contrary ].

He was illegally removed from office [ according to fellow leftists who agreed with his attempts to violate the countries Constitution against the ruling of the Supreme court.  However the Congressional Research Service (a nonpartisan entity within the Library of Congress working on behalf of the United States Congress), after studying the relevant texts of Honduran law, determined that “The Supreme Court of Honduras has constitutional and statutory authority to ... request of the assistance of the public forces to enforce its rulings,” and did not misapply its authority in this case: “Available sources indicate that the judicial and legislative branches applied constitutional and statutory law in the case against President Zelaya in a manner that was judged by the Honduran authorities from both branches of the government to be in accordance with the Honduran legal system.” ].

The US even called it an "illegal coup" [ according to The New York Times, a former news paper and current propaganda outlet of the Marxist left that lost credibility long ago; not that it matters because Honduras is a sovereign nation with an elected legislature and court system that voted for the actions undertaken by the military; therefore making it the equivalent of a lawful impeachment by an elected legislature and not a military coup. ]

Did you even read the sentence before copy pasting it from eanswers.net?

As a matter of fact I did.  The wanna be Marxist dictator claims he didn't sign it.  Additionally, I don't give a fuck if he signed it or not.  His removal was jusified based on his actions alone.  The Supreme Court and the majority of his own fucking party voted for his removal, fuck him.

He was elected by the people of Honduras. You sound like a Neocon.

And?  You think that gives the man authority to usurp powers not granted to him by their Constitution?

You think that grants him the power to ignore their Supreme Court?

Jesus, I thought you were based, but you sound like a Marxist Revolutionary.

The US even called it an "illegal coup" [ according to The New York Times, a former news paper and [blah blah blah]

According to the US president

You think that gives the man authority to usurp powers not granted to him by their Constitution?

He was asking the people of the country whether they'd like to ammend the constitution. His efforts were non-binding. It was an survey, that's it.

You've copied & pasted snippets of legal analysis about the ruling of the legality of the referendum. This is irrelevant, he was forcibly removed from power with US backing. He was not afforded anything resembling due process. The Supreme Court doesn't have the power to remove him from office. They could have detained him for misconduct & put him on trial.