The sheer insanity of Rudy Giuliani matched with the Trumptard state media forum of Judge Judy called hilariously "Rudy Giuliani Shreds Impeachment" makes for a comedy act that resembles a Laurel and Hardy on drugs skit. Rudy just rambles in every direction spewing idiotic drivel and Judy nods her head in agreement and smiles. Classic Rudy. No way he testifies but it would be funny.

In a rambling interview, the president’s personal lawyer appeared to simultaneously argue that the Supreme Court can and should nullify the impeachment while in the same breath admitting the Senate trial would benefit Trump.

Claiming that the abuse of power and obstruction of Congress charges against Trump are essentially made up, Giuliani said, “The remedy is to go before the Supreme Court of the United States and have it declared unconstitutional.”

“Suppose somebody charged me with not looking nice tonight … and brought me on trial before the New York Supreme Court. … It would be dismissed,” he said.

If the impeachment trial is not blocked, he said, Trump would be “acquitted” but there would be no limits on impeachment and then “the next group of maybe crazy Republicans are going to go after some Democrat.”

“I can even argue that politically it would be better to go to trial! They’ll find out about Biden, they’ll find out what a big crook Biden is,” Giuliani said.

Apparently forgetting about Ukraine entirely—the country where his own crusade to expose Biden’s supposed corruption has proven central to the impeachment proceedings—Giuliani said a trial means that “they’ll find out that Biden just didn’t make money in Iran, but he made money in China, and he made money in Iraq.”

Trump himself has previously vowed to “head to the U.S. Supreme Court” in case of impeachment proceedings against him, and he singled Giuliani out on Twitter for a “thank you” late Saturday after the lawyer pushed the argument on Fox News. In a 1993 opinion by Chief Justice William H. Rehnquist, however, the Supreme Court itself ruled that “the judiciary, and the Supreme Court in particular, were not chosen to have any role in impeachments.” 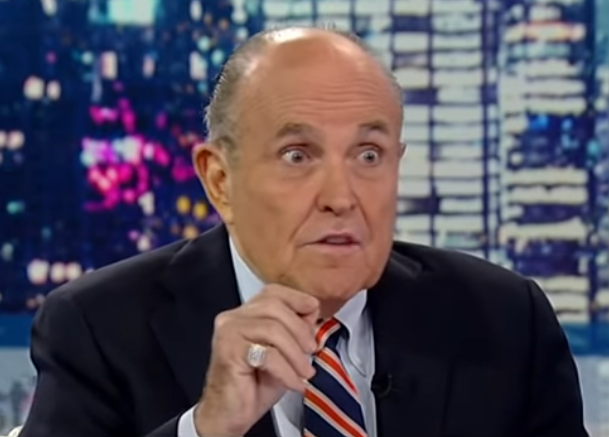 Makes sense to me, I understand this might be way over your head as the legal system and political systems are hard to understand for the average laymen like yourself. Rudy was a former prosecutor and the other was a judge yet you mock and say its comical and you know better then they do. OK buddy, keep driking that kool-aid!

I defer to the sharpest character to ever write a SpikedNation comment. You and Rudy are one.