Accusing Xi and the CCP of witholding the deadly truth seems......rude.

People in Wuhan, China knew their government was comlpetely full of shit and lying about the number killed by Covid-19 over a month ago.

So much truth being met with skepticism is criminal. 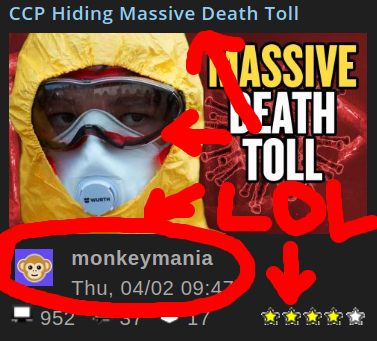 It's funny you think this vindicates you. You'll no refuse to engage in any kind of honest discussion. Acting like a retard is your go-to.

Every country has deaths that go unaccounted. Which ones will later publish more accurate data? So far only 1 has.

dinmin, there's no engaging you in discussion. That ended a long time ago. Engaging you is like engaging a scientologist. You are a CCP troll, whether paid or otherwise, and all you do is push the CCP line. That leaves zero room for discussion. Just keep believing your bullshit and people on here will accept reality instead.

Your CCP dogma is pathetic. Everyone on here sees it. You have been hurt today and you are flooding Spiked with your bullshit. It's pathetic but not surprising in the least. Your virgin wumao status is solid. You make Xi proud.

LOL I didn't even watch the video until now. I though it was going to talk about the revised statistics for Wuhan.

This is just a video alleging the Chinese authorities covered up the virus. The AP article it's based on (Jan 14-20 before confirming h2h transmission) is already debunked. Warnings were going out since December & limited h2h transmission was confirmed on Jan 14, the proof is in this Reuters article: 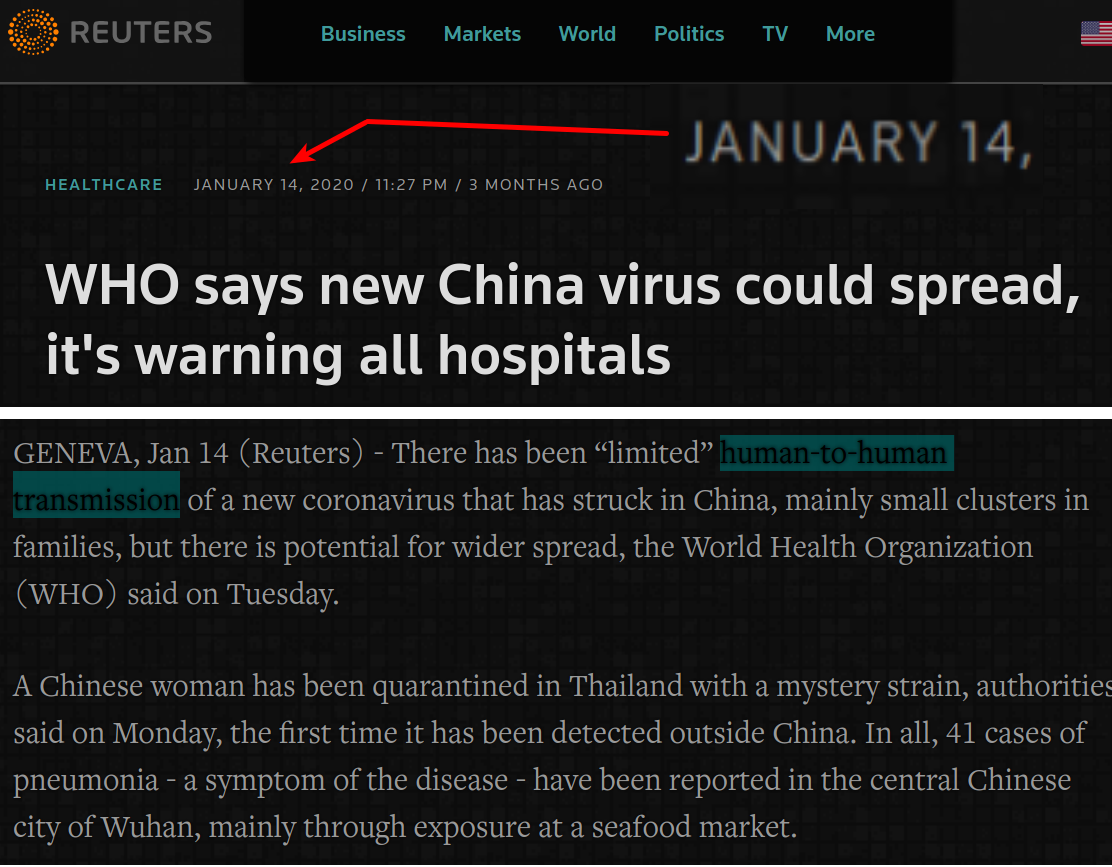 Jan 20 is when China's top expert Zhong Nanshan confirmed the h2h transmission was not sustained, not limited. The difference is huge but since you swallow Falun Gong disinfo you'll probably never get it.

You have to wonder though, why is the Whitehouse & CIA still trying to find proof of this alleged "coverup" if it's already been proven?

Wuhan adjusting the official figure is not proof of any kind of cover-up, it's acknowledgement of the people previously unaccounted for deaths & in some cases double counted cases. People who died in homes & prisons were not all counted before.

was reading about the china vs thai troll wars going on right now. saw this and its got you pegged.

besides being Thai, chad thai is accurate for me

AWWWWWW Something got you all riled up. What is it? It follows that the virgin wumao would be hurt by the truth of their new label but you are really losing it.

they have another name other than the 50 cent army. i'ts "Little Pinks"

Made it 5 seconds into the video before the disinfo started. He claims China covered it up until Jan 20 .... but the WHO warn countries in Jan 14. Did the WHO have a crystal ball or...? 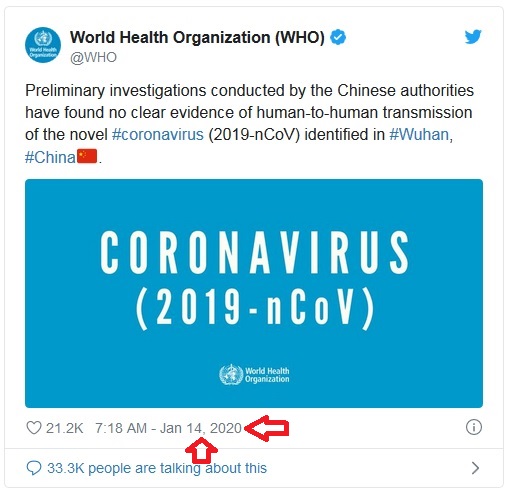 Yup, they've admitted that was an unfortunate TWEET in hindsight. It differs from what they were telling the health authorities around the world.

If you had the balls to say something with that picture we could discuss it but unfortunately for you, you don't have the balls & aren't interested in the truth.

The Reuters article proves they had warned the world health authorities of h2h transmission.

Is this a "coverup"?

When will the US adjust their figures to be more accurate?

dinmin, our very own virgin wumao, is off the rails right now. The comedy of his flood of posts is great though.

It's funny is you think Falun Gong thumbnails mean something.

Your obvious lack of intellectual honesty is more just sad, like a kid acting like he won a game when he doesn't even know how to play.

throwing your hat in with disinfo that fits your narrative never backfires, right Russiagater?

CCP is truth! Everything else is lies! Falun Gong organ harvesting is just disinfo! The Great Famine resulting from Mao's Great Leap Forward didn't result in 45 million people starving to death! There was no Tianamen Square Massacre in 1989! There are no Xinjiang Prison Camps that have brainwashed millions of Uighurs with thousands of them dead!

All China good! Everything said bad about China lies! 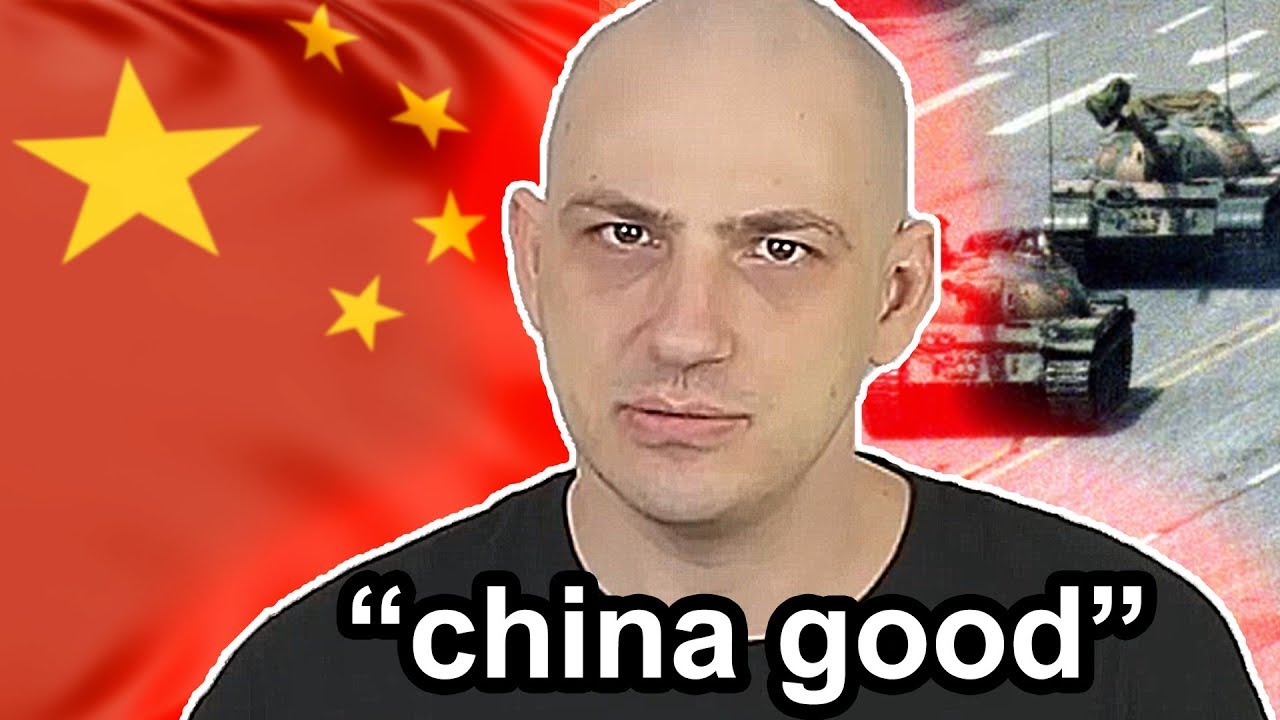 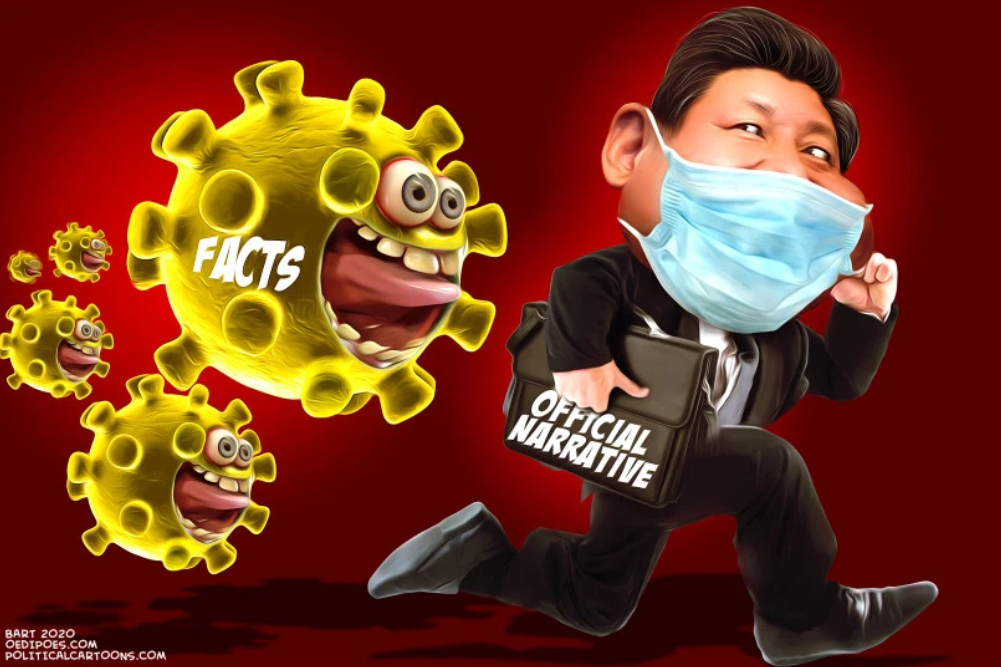 so danman which if any of those 4 points is untrue?

"organ harvesting" is a stupid term & what it refers to ended years ago.

"re-education camps" is another stupid term, there is some truth to it but they're far more than just re-educational & they aren't camps

The great famine happened, this is obvious.

This might seem like whataboutism but whatever...Of all people you should not really be wanting to dig into government denials/coverups given where you live. I'd rather discuss the above though. If you disagree with what I've said, great, tell me what you disagree with.

You keep walking into that meme - the Chad Thai doesn't care about what you have to say about their own gov; the Chad Thai freely rips his own gov a new ass on the regular. The focus is on the CCP. "Organ harvesting" is a dumb term and the pracice "ended years ago" LOLOLOL. Do you have any idea how bad you actually are at this?

It's not my gov & I was asked a direct question, genius.

You're trying too hard. Go clean your room.

That is core wumao thinking right there. Thank you for making your virgin wumao status here absolutely clear. You really are bad at this.

I really hate CCP trolls. but free speech though.

China Uncensored is actually a pretty great channel. The CCP is so destined to fall in the coming years, tho its not even funny. Aside from this whole virus stress on them, they have been in slow-mo collaps for years. For example, their armed forces didnt have 'joint command' until 2012 and it is still not fully installed as a funtioning system of schedule managment since it is widely ignored at this time. If you're not informed on the concept, Joint Command is the idea that when the Army is going to have a field exercise or some such war game, they tell the Mariines, and the Navy, and Airforce and so forth. There is also a scheduling and calendar system and a governing body that says things like, 'No Army, the Marines already have that area booked for the 3rd throught the 20th. You have to push back to next month" and so forth. Very boring and logisitic. So why does this matter? Because before then, and even now since CCP leadership ignores, and often completely fails to register their exercies and war games scheduling with joint command, they end up having lots of 'blips' showing up on their radar that they are not sure are Chinese, American, Russian... it causes panic and panic cuases problems. They end up shooting at their own soldiers often, and then end up trying to cover it up as an accident, or an attack, or a secret battle that should not be dicussed for national secruity reasons. Love em or hatet em, the CCP is not good at taking responsibility for its mistakes. As you might imagine, these freindly fire accidents can someties effect senior leadership, and their friends and families, as many in the senior military leadership push their sons into the Army/Navy/etc as well, hopingto raise them up to be admirals and gernerals and so forth. But, having to go to work everyday, with the knowledge that Adimral ____ shot your son's destroyer to the bottom of the sea because he didn't registar with the JC that he'd even be in ____ waters and that caused him to be confused as an un-friendly element on your radar, a fight breaks out due to confusion or just delay in communication, and people die, like your beloved son. There you are in a position of power, very upset, surrounded with soldiers, missiles, and a pretty decent exuse to cover the tracks of your revenge... Maybe you find out through JC while registering your next exercise that the admiral responsible for your son's death will be in ____ location all of next month... maybe you forget to register that you will be there, or just let the shit systems of joint command fail to put you in their systems... and now you have a path way out of responsibility if you 'accidentally get revenge on the man, or at least the unity that killed your Son. Its not a mystery as to why small and even large groups of their Military are bonding and forming sort of 'factions' with their own internal loyalties and enemeies. Can you imagine that in the USA? If you joined the Army, and your batallion commander had a grudge against some other battalion commander, and so you have to worry about your own country men killing you, and that you might get an order to set fire to a mortar into some random fellow soldier for the crime of him serving under the wrong allied commander? Insane. The rifts in just this area are expanding exponentially, and I have not even covered the failing moral of the CCPs soldiers due to odd decisions the CCP has had to make like not arming huge groups of their own soldiers out of fear of Neglegent Discharges of weaponry since they are trained primarily with books and online resources rather than hands on training. Adding to that this Virus that tends to wipe people out if they group up, which solders tend to do in barracks, and you've got a stress on their armed forces that will take its toll. a heavy, heavy toll.

monkeymania is from HK spreading some lies which i'm sure he thinks are true. Gearing up for more violent protest?

Actually, I'm from AK and I'm more into spreading truths which I think are lies. 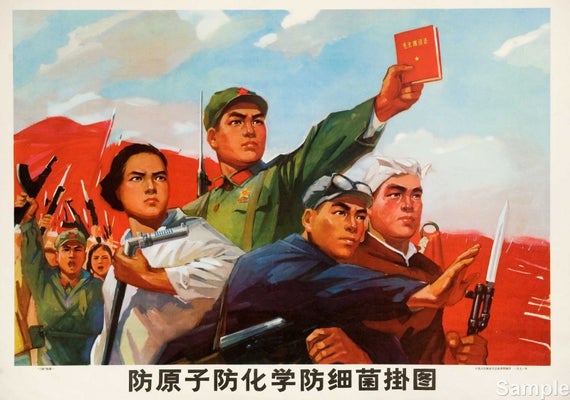