That person at around the 5 minute mark - that's happening in the UK and it's not me or anyone I know so I shouldn't be concerned about it. The police wouldn't be at the door if the person hadn't done anything wrong. That's what the police are for - to arrest people for talking about stuff in public that's been prohibited by a legal court of law. It's all legal and I'm a law abiding citizen so I know there won't be a knock at my door, especially if I stay current on the list of topics that are illegal to discuss. The police arrest criminals - they won't be arresting me.

10 minute mark - and look what happens. You have a reactionary right-wing movement with a flag that actually says "Make Britain Great Again".

I really do think censorship backfires in the majority of cases.

This is not a censorship issue. He was chucked in jail for fucking with the justice system. He was already serving a suspended sentence for doing the same thing last year - his jail term was suspended on the agreement that he not do it again for 18 months.

“This is not about free speech, not about the freedom of the press, nor about legitimate journalism, and not about political correctness,” the judge told Robinson at the time

“It is about justice and ensuring that a trial can be carried out justly and fairly, it’s about being innocent until proven guilty.

“It is about preserving the integrity of the jury to continue without people being intimidated or being affected by irresponsible and inaccurate ‘reporting’, if that’s what it was.”

I'm aware of all of that, as shown by the sarcastic description - it's nonsense. There comes a point where it ceases to matter what the courts are ruling - these laws are enforced selectively to achieve a specific political agenda. It's got to the point where it's an arrestable offense to shed light on the UK's corrupt legal system and process. This is censorship of speech based on political concerns, legitimized through an increasingly authoritarian legal system in the UK. If I lived in the UK, I would leave pronto - I think it's too late or impractical to oppose this tyranny by force in that country. The only option is to move.

these laws are enforced selectively to achieve a specific political agenda

Yeah the law may be enforced selectively but the guy was already charged with it last year & was on a suspended sentence. That's kinda flagrantly violating the law & asking for trouble.

If you're gonna argue that his arrest was political you need to know who gave the order to arrest him. Otherwise you're just guessing. (the proverbial 'you', not you, skeptoid).

I don't see any reason to think the cops are motivated by a political agenda. They probably don't like "Tommy" for a bunch of reasons - the guy organises hate marches & the lefties hold parallel anti-hate marches.... just a big pain in the ass as a cop to have to worry about that stuff instead of go after real criminals. They have set budgets to work within.. think about the cops as just workers for a sec, not tools of a corrupt regime. The key question IMO is: who sent the cops to arrest him?

Sure there are real greivances that seem to be being ignored &/or mishandled by the authorities in the UK - they've been too soft on this immigrant rape culture for years. It doesn't mean anti-Muslim hate groups are a good idea though.

The cops? No the cops are told what to do and then to do it. Because it's illegal to talk about it, Sargon decided to make his point this way. Also, where are the anti-muslim hate groups here? That's like saying Jordan Peterson hates transgender people.

the cops are told what to do and then to do it.

I think you're missing the point - the cops have bosses & these bosses are also cops. Ultimately the cops answer to the government but I've not seen any evidence of political influence leading to this arrest. Just a bunch of accusations by people acting like headless chickens.

where are the anti-muslim hate groups here
They're watching his stream. Maybe you don't know who "Tommy Robinson" is... he's an anti-Muslim activist, founder of the EDL & former member of the BNP. Have you not paid any attention to the EDL in the past 10 years?

Here he is stating his platform: https://www.youtube.com/watch?v=X6liK7-3DGk

His schtick is that Islam is thte problem and it stems from the Koran... but he's not targetting all Muslims because.....?

Here's an example of their demonstrations (caution, ear rape)

.... it's pretty ignorant shit. They have no interest in rape gangs unless they're Muslim. Did you ever stop and ask yourself what's the bigger picture here? His MO is to stir racial tensions. Who backs him? What's the agenda? You're capable of thinking deeply about things but you sell yourself short with this knee-jerk shit Skepto mate.

I don't see JP accusing all LBGQTPRQSWV people of supporting Marxism so that's a false equivelency.

The video clearly shows the selective enforcement of laws based around the fear of appearing intolerant of Muslims - that's the politics at play and trying to invoke the need for proof of a moustached-twirling villain giving an order is silly - and the resulting backlash is both understandable and predictable. Robinson denounced the EDL and founded an organization with an Muslim ex-extremist in 2013, but they later parted ways. What you just posted above is extremely misleading - Robinson had denounced and left the EDL many years before the EDL event you posted from mid-2016 and Robinson continues to denounce them. Any time you base an accusation within an anti-Zionist framework I notice that your objectivity flies out the window.

Jordan Peterson once worked for several years with the far left NDP political party in Canada - what you have done above is the same as if I were to call Peterson a far-left socialist because he was once associated with those people. Yes, the EDL is full of ignorant, poorly educated, scared and angry people - very similar to the Muslim extremists Robinson is being jailed for trying to shed a light on. I agree with one of the three statements from the slogans you wrote above - the third one. Robinson turned on his former EDL reactionaries, and he even worked with a Muslim ex-extremist who was trying to do the same for his community.

By smearing and jailing Tommy Robinson, they are accelerating the rush towards violence.

When exactly did you become concerned with freedom of speech in UK? Was it before or after Julian Assange was completely gagged, dispite not being charged with a crime?

What about the people who've been sentenced to years in prison in UK for committing "hate speech" offenses?

Y'all got jebaited by a guy you've probably barely heard of before yesterday. You're falsely claiming this is a free speech case when it's not at all. He was arrested for filming people on trial - something that's against the law in the UK. He was done for it last year too. That's why he's in jail. If you wanna champion his rights, at least inform yourself.

Or are you just indignant about gag orders being placed on the British media?

"His MO is to stir racial tensions."

So what race is Islam, exactly?

LOL, in order to prove that the law is used "selectively" one would have to show examples where it was not used but should have been. And all this from legitimate sources, not those with a bias.

The video contains several examples of selective enforcement - the most obvious one being at 3:30.

The focus was on unbiased (if possible), still:

According to the narrator the lady complaining was asked to come to the police station to file a report. She declined (and most likely decided to stir things up further in the "event", but this is beside the point). More likely than not the cop wanted her (and others?) to file complaints if the "event" indeed was not in accordance with the law so that there are written records of the authorities wrongdoing.

This is not a censorship issue.

Are you fucking kidding me, the judge literally ordere a media black out.

If people gave a shit about freedom of speech they'd protest the silencing of Julian Assange who had ALL contact with the outside world cut 57 days ago without being charged of a crime. He's someone who actually fights for our freedom of speech, not this pied piper for UK bigots.

WRONG! He is a "white" nationalist like you, EDL founder and BNP member. His focus always were the arabs and he is only doing this for publicity and propaganda stunts.

The man has NO involvement or interest whatsoever in gathering evidence, arresting or convicting child rapists (regardless of ethnicity). NONE. His only agenda is to get the muslims (regardless of citizenship) and others that don't match his white supremacist ideal removed from the UK.

cant wait for the liberals to get overthrown this makes my future look bright with so much excitement for the future!!!

What is happening in the UK at this very moment, the jailing of political dissidents for reporting news unfavorable to the State, is just one reason of a long list of reasons why red blooded American's so vehemently defend the 2nd Amendment and an armed citizenry.

The day US citizens are arbitrarily snatched off the street for nothing more than talking into a camera is likely the day a second American revolution kicks off.

Unfortunately the end game of the UK government elites completely striping their subjects of effective weaponry has come to bear.

Yeah the UK elites are the worst. 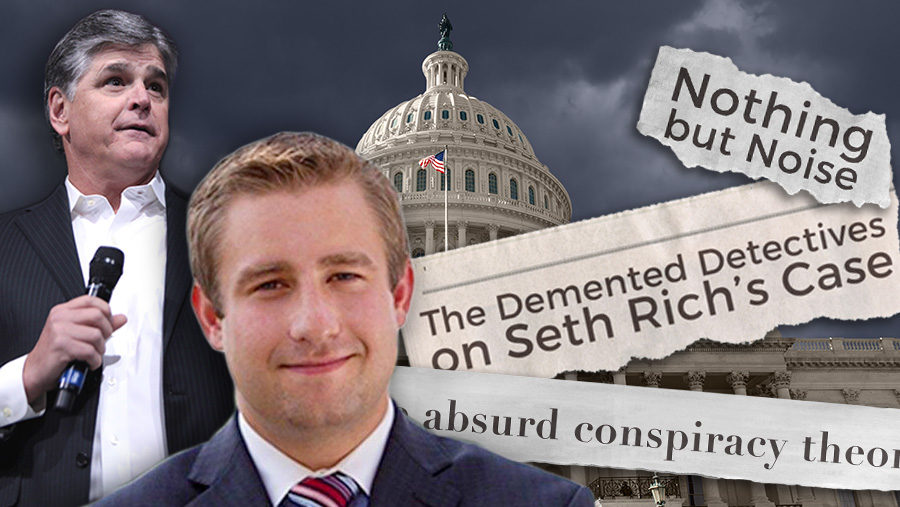 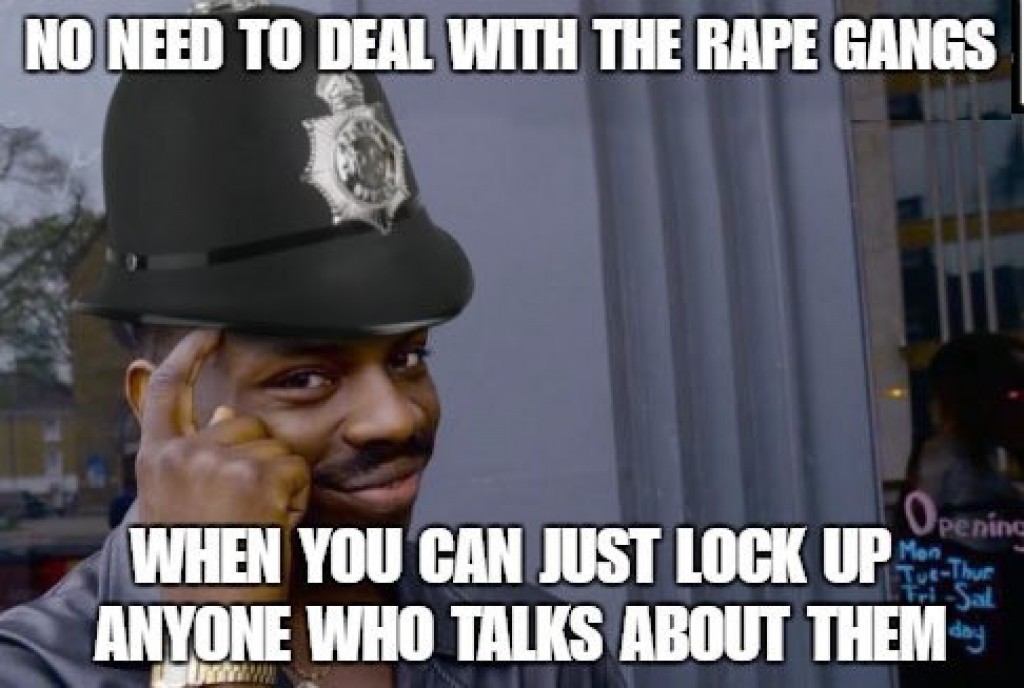 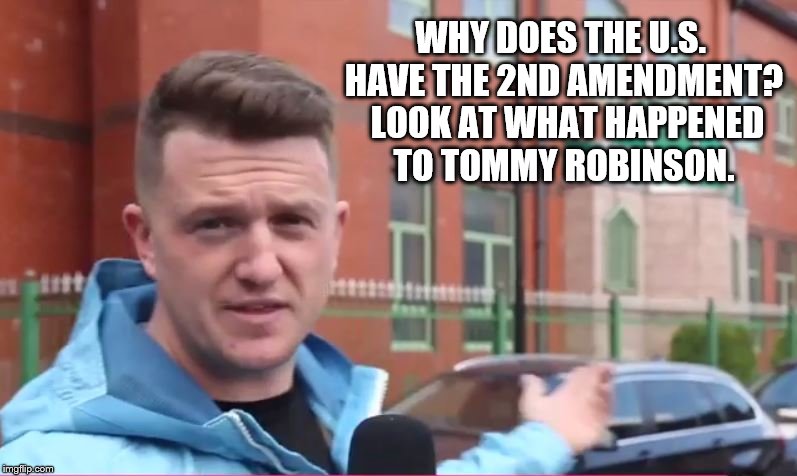 How many police officers would you kill to help Tommy Robinson? 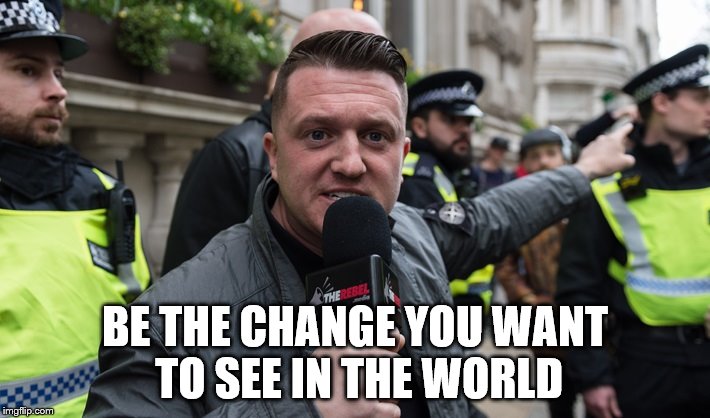 It is outright comedy that people that have not the slightest idea about UK or Europe take a view on the political situation with a far right opinion video as a basis.

Boys you are shallow.

So, yes! It is just alarmist nonsense indeed! Go and do something valuable with your life.

I find it extremely interesting that the loudest objectors to this are right winger Americans. Where are the Centrist and Leftist Brits calling this out?

It is because this shit is spread on right wing and conspiracy theorists sites. In the UK and Europe only the extreme (beyond "alt") right will pay attention to this, all others will just have said "Awww, this dumb cunt again!"

On spiked we only have to look at who posted and who defends this. If there would be any surprises one might even want to pay attention, but no, it's just the usual biased suspects taken straight from the two groups above..

It is unbecoming to reduce people's moral complexity.

what is it with people having strong opinions without informing themselves?

Dear Tommy Robinson fans here’s a lawyer who prosecuted the Rochdale grooming gang telling how Tommy broke the law & his reporting could have lead to guilty people walking free.

Let me guess tho “brexitJim53” off twitter knows more than this prosecuter... pic.twitter.com/lfLv8v0ayC

Examples of cases that collapsed in UK due to prejudicial reporting: