Here's the melee with the live announcers..

What the heck!! #UFC229 pic.twitter.com/DyJswVbcXd

All media reports I've seen ignore the fact that Conor threw the first punch in the melee...

Trying to go after Khabib men

This was pure comedy #UFC229

Drake coming for Khabib after the fight with Conor McGregor.

They don't call him the eagle for nothing... 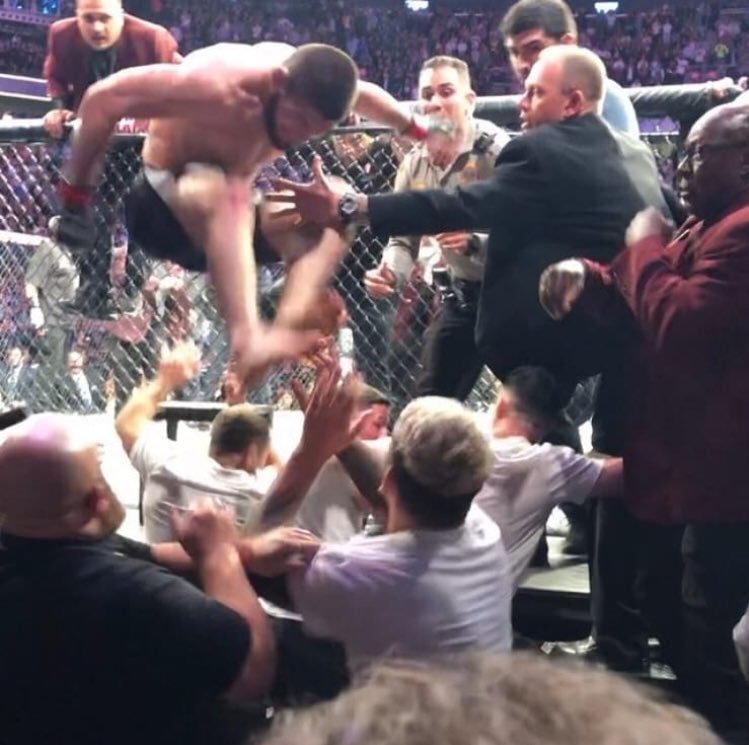 He took Khabib lightly and he paid for it.
Sahe ki dulai ki hey eski#UFC229

When the clown Conor McGregor & his rat Dillon Danis realized that the UFC Lightweight champion Khabib Nurmagomedov & his brothers weren’t all talk,Poor idiots they wanted Khabib to get out of bus & when he did they get the beating of their life #KhabibMcGregor#UFC229#Khabib pic.twitter.com/dp1ResrGbe

When will these people learn that violence is not the answer?

It is the answer if you wanna win the fight. Maybe when such a sport is no more then maybe violence will stop being the answer, otherwise...

Race war is over. The Irish lost again.

It got better. 10-15 Khabib fans holding off an army of Conor fans. One fool ended up sleeping like a baby. #UFC229 #KHABIBvsMcGregor pic.twitter.com/GDCjSWrssl

"You can do whatever you want in the octagon; outside of it, there's children, women, random people. My team has always been known for its discipline, hence my sanctions to Khabib will be much stronger than the ones from UFC" pic.twitter.com/WsMcSX1WHT

(if you saw the fight you'll know why)

We lost the match but won the battle.
The war goes on. pic.twitter.com/CRtPaGfOnn