Selected media organisations from around the world were invited to witness the event:

"The president made it clear. This will only end like the Libya model ended if Kim Jong Un doesn't make a deal."

He has always had a plan and unless making money for himself, his family, or his friends, he follows it......right?

He's so concerned with jobs and yet by cancelling the JCPOA 100k jobs were lost at Boeing alone. High-paid jobs too.

collateral damage, making iran an enemy is as much a goal as making iraq one was. also boeing donated quite a lot to democrat candidates in the 2016 election, so not even really collateral from that point of view.

Appearantly inspectors weren't allowed to come to the nuclear test site, only journalists who do not have the expertise to confirm such a process.

NK also complained about the joint war games by South Korea and United States, and cancelling a meeting with South Korea because of it.

NK has not responded to previous WH requests for communication this past week until NK media brought their statements about nuclear war yesterday.

US sent a team to Singapore to make preparations for the planned meeting between Trump and Kim Jong Un, but NK's representatives never showed up.

These are statements made by an unnamed official of the Trump administration to Norwegian media(where I got this information) and other international outlets. The meeting has been in the planning stages since March 8th, when the invitation was received.

but they were allowed to take plenty of pictures and video, which can be used by experts to verify the process. also details have been known for years about the progress of the nuclear program and site from just satellite imagery, so no-one actually has to be there.

agree that's not good but then neither is holding war games during a peace conference, they should've been skipped this year or at least postponed.

Bolton, Trump & Pence all threatened NK with the "Libya model". That was more of a factor than the drills, based on the reactions of the NK leaders. When clarifying the "Libya model" they did not back down & say "just the denuking part" but actually threatened the destruction of NK. Very immature administration in Washington.

well pence is an evangelical and firm believer in the rapture, bolton is one of the leaders of the new american century model, and trump is either keenly earning a spot for himself or stupidly being played to work against the interests of most americans in favor of those few whispering in his ear.

"but they were allowed to take plenty of pictures and video, which can be used by experts to verify the process. also details have been known for years about the progress of the nuclear program and site from just satellite imagery, so no-one actually has to be there."

So blowing something up on video versus on site experts verifying that the actual technology used to create and test nuclear weapons was actually destroyed safely and not moved or replaced, is better or even adequate in your mind to ensure South Korea and the world is safer from annihilation from a country which has threatened to use nuclear weapons against their sworn enemies for decades?

And who needs evidence confirmed to be genuine by experts when we have satellite imagery?

It's not like that could lead to a devastating war with perpetual conflict?

Trophy boy victim of Assad bombing, which turned out to be a "opposition explosive". 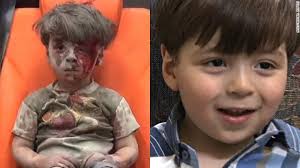 (Yes you were in fact exposed to Fukushima radiation, a full X-ray worth of it)

Research, development facilities and test sites could be intact and continuing down there for all we know. But we can't know, because the people with the expertise to know that weren't allowed to confirm that, nor check how large or capable the facility actually was or even what the extent of the contamination is.

But it would seem to be a great trick using just the media to report that it has. He still hasn't given up his nuclear arsenal. Showing US experts what NK nuclear capabilities are before that is even an option would be stupid so of course he wouldn't let them come.

Which means NK is in no way a "victim" during this ordeal.

This looks to me like they're trying to make a big publicity stunt out of destroying the few facilities that were left of their already mostly destroyed and unusable test site. Not to mention if they already figured out how to make nukes small enough to fit on ICBMs they wouldn't need such a site anymore. That destruction of the test site meant absolutely nothing.

Pence's remarks were downright dumb unless he wanted to create an excuse to cancel the summit. And it worked. But I doubt that the destruction of the test site has anything to do with it.

Why do you say that site is unusable?

All reports I've seen say that this test site is the only one in NK that is known. And although NK have successfully tested ICBMs, they're still 2-3 tests away from mastering the re-entry aspect - this suggests that destroying the site was more than just show unless I'm missing something?

The underground facilities of the site had collapsed at the last test. It is very possible that the damage done to the ground by the tests made it impossible to safely rebuild the site at this location. And since they claim to have achieved a bomb small enough to fit on an ICBM there wouldn't be a need for such a test site anymore anyway.

Unless you know something that I don't a nuclear test site and an ICBM test site are two different things. And I'd be very surprised if they had their ICBM test site at the same location where they detonate thermonuclear warheads.

Yeah good point, I was way off, I thought they had collapsed the missile test site.

Having watched the Sky News footage of the demolition I'm not even convinced it was a nuclear test site. The journalists had their geiger meters confiscated, for example.