>> The FBI Informant Who Monitored the Trump Campaign, Stefan Halper, Oversaw a CIA Spying Operation in the 1980 Presidential Election

This is what the deep state looks like, in case you wondered: 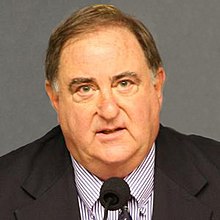 AN EXTREMELY STRANGE EPISODE that has engulfed official Washington over the last two weeks came to a truly bizarre conclusion on Friday night. And it revolves around a long-time, highly sketchy CIA operative, Stefan Halper.

Four decades ago, Halper was responsible for a long-forgotten spying scandal involving the 1980 election, in which the Reagan campaign – using CIA officials managed by Halper, reportedly under the direction of former CIA Director and then-Vice-Presidential candidate George H.W. Bush – got caught running a spying operation from inside the Carter administration. The plot involved CIA operatives passing classified information about Carter’s foreign policy to Reagan campaign officials in order to ensure the Reagan campaign knew of any foreign policy decisions that Carter was considering.

Over the past several weeks, House Republicans have been claiming that the FBI during the 2016 election used an operative to spy on the Trump campaign, and they triggered outrage within the FBI by trying to learn his identity. The controversy escalated when President Trump joined the fray on Friday morning. “Reports are there was indeed at least one FBI representative implanted, for political purposes, into my campaign for president,” Trump tweeted, adding: “It took place very early on, and long before the phony Russia Hoax became a “hot” Fake News story. If true – all time biggest political scandal!”

In response, the DOJ and the FBI’s various media spokespeople did not deny the core accusation, but quibbled with the language (the FBI used an “informant,” not a “spy”), and then began using increasingly strident language to warn that exposing his name would jeopardize his life and those of others, and also put American national security at grave risk. On May 8, the Washington Post described the informant as “a top-secret intelligence source” and cited DOJ officials as arguing that disclosure of his name “could risk lives by potentially exposing the source, a U.S. citizen who has provided intelligence to the CIA and FBI.”

The top Democrat on the Senate Intelligence Committee, Mark Warner, who spent much of last week working to ensure confirmation of Trump’s choice to lead the CIA, Gina Haspel, actually threatened his own colleagues in Congress with criminal prosecution if they tried to obtain the identity of the informant. “Anyone who is entrusted with our nation’s highest secrets should act with the gravity and seriousness of purpose that knowledge deserves,” Warner said. The fact that this is getting one-starred in a rush from the usual shitheads tells you all you need to know. This is true - it's not fake news. It's  not something you can hide from or spin or reset. Stuffing this post won't change it.

The world moves on, and a lot of people are looking pretty dusty to me right now.

This is the most grounded post on this story I'm going to make. Ron Paul and Glenn Greenwald are voices of reason & both very knowledgable in this field (government, media, deep state).

If I get time I'm going to explore this issue on Spiked & even post some stuff with conspiracy theories just to throw some ideas around. To get to the bottom of this will take citizen journalism. Establishment media has helped (for whatever reason) to out Halper. If you read the Greenwald article it's strange how his identity became known.

Trump will maybe push back a little but I don't expect much from him. He doesn't seem concerned about going after the Clinton cabal for some reason. Maybe he's satisfied with his popularity & doesn't want too waste time on it.

The Democract party stinks. Podesta, Clinton & their loyalists in the government & media have done a lot of damage.

Tim Pool is fed up and asking for citizen journalism to become the norm: