Everyone must be sick of hearing about this by now, with all the coverage it's been getting!

Israel has been shooting the protesters because ...?

Hundreds of people have been injurered with doctors reporting strange wounds

Why are they protesting?

700,000 Palestinian Arabs (Muslim & Christians) were forced to leave the land which is now known as Israel in 1948

Since 1949, the UN has voted every year to enforce the Palestinians right of return [link]

yeah i have to say this hasn't been on the news here or in any of the other sources i regularly read online.

any more detail regarding the strange wounds?

edit: just checked for specifically middle-east related news, this story was 53rd on the list, so it is technically there if you really want to find it.

This is an excerpt from the report that they mentioned:

...the exit wound gives an indication of the unusual destruction of soft tissues and bones inside the wound. The exit wound is disproportionately wider. It can be the size of a fist, or even of an open hand. These impressive lesions are obviously difficult to repair and often require subsequent grafts. In half of the injured we’ve received, the bullet has reached the bone, causing multifragment fractures, which means the bone has literally been turned into dust.

The bullets also cause multiple and irregular tears in the soft tissues (skin, tendons, muscles, nerves, and arteries). This leads to devascularization, which is to say that the blood flow doesn’t reach these tissues anymore, which in turn creates high risks of infections.

We need some Israelies nere here, I have to pay £2.50 to get an old tyre properly disposed of , arabs can just burn them! 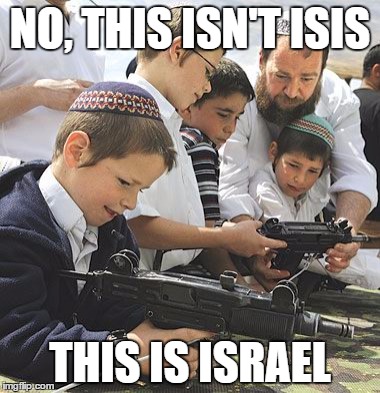 If a religion with 1.8 billion followers held as part of it's foundational beliefs that me and my people deserve to be exterminated or enslaved, I'd be teaching my kids how to handle a fucking sub-machine gun too.

The difference you hope nobody will point out is that I don't have to worry about Israel cutting off my head for not being a Jew, whereas your fellow Muslim Brothers would happily behead me on camera for not accepting your evil fucking religion.

Jews have lived alongside Muslims since Islam's inception. Christians are the ones who have a history of persecuting Jews.

Israel are best friends with the head-chopping Islamic radicals. For the past 7 years al Qaeda and ISIS have been camped right on Israel's border. The Israeli response? Bomb the Syrian army & patch up al Qaeda in Israeli hospitals. ISIS has attacked Israel just one time and it immediately apologized........ Think about that for a second.

One might ask, if those people don't want to risk being killed why don't just stop doing stuff to get shot?