My Interview with Dave Portnoy of Barstool Sports!

Trump is just a total moron and a pathological liar. Period. 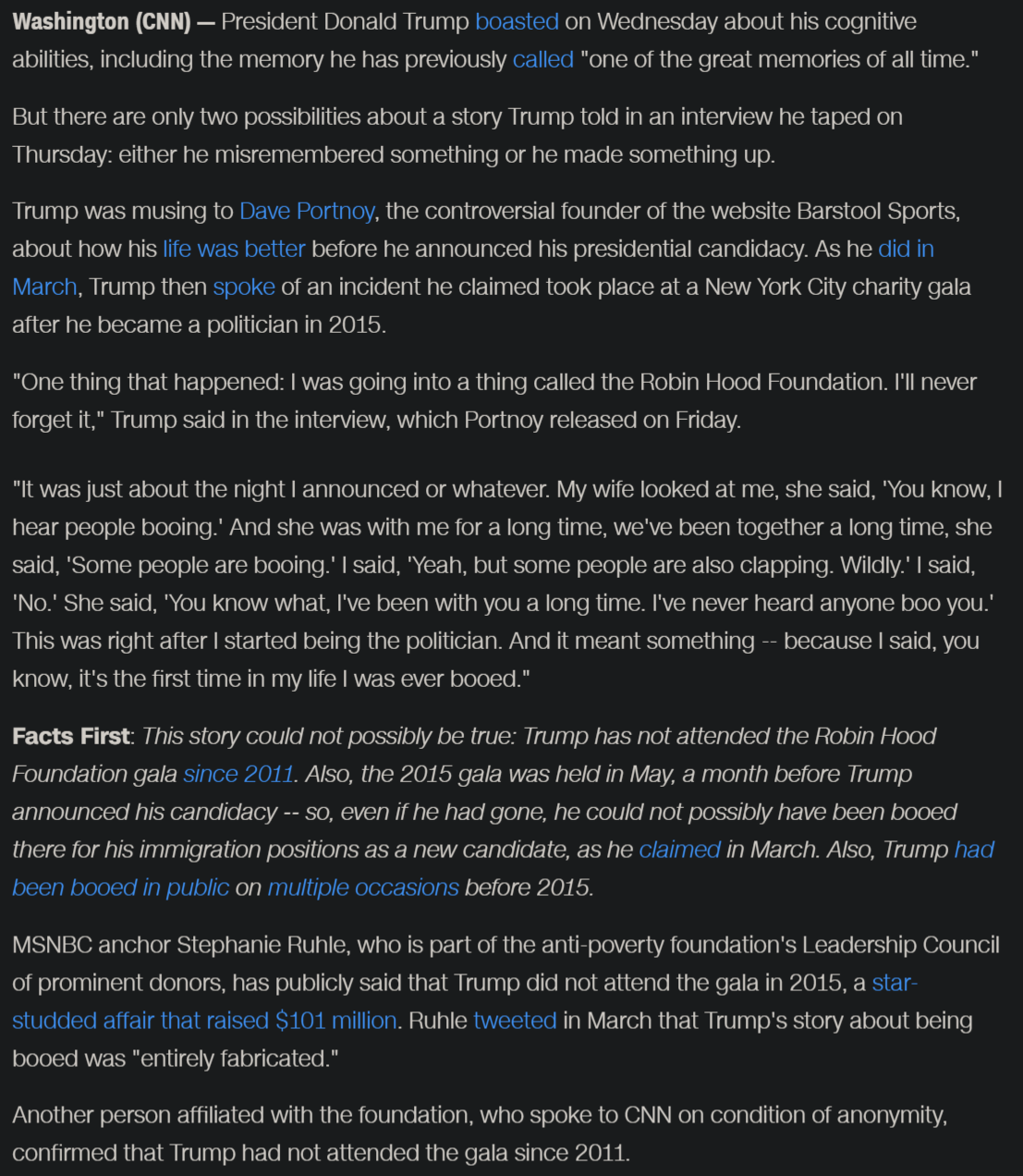 "One thing that happened, I was going into a thing called the Robin Hood Foundation. I'll never forget it. It was just about the night I announced or whatever. My wife looked at me, she said: You know, I hear people booing. And she was with me for a long time, we'd been together a long time. She said: Some people are booing! I said: Yeah, but some people are also clapping, wildly. I said: No... She said: You know what? I've been with you a long time, I've never heard anyone boo you. This was right after I started being the politician."

Considering that CNN is the source of this article, I would say it is more that they put this soon to be retracted "error" in there on purpose in order to disinform their viewers(you), while simultaneously insulting Trump by combining it with their recent coverage of his cognitive test, which he took a while ago and aced, which CNN hosts managed to fail live on television attempting to downplay it as a test for children.

Nice spin. Uh no. Trump has told the story before and was referencing 2015. Whatever it takes to defend the dear leader though I guess. He must seem like a genius who never lies or forgets anything to you. Enjoy life in your bubble.

Still, Trump's account has evolved over time. He told a highly similar booing story to the New York Times after his election in November 2016, except he did not name the Robin Hood Foundation gala as the venue, put the incident "about two years ago" rather than in 2015, and said it happened "just after I started thinking about politics" rather than after he announced his candidacy.

He was sloppy with the details, which is not a new thing.

It still remains that he never said "2015" in the interview CNN refers to, and his telling of the same story in the NYT interview in 2016 where he said "about two years ago", which if you were a hyperactive CNN activist, would still put the event he describes in 2014, which is still not in 2015.

By using the word "about" shows that he wasn't being particularily specific about the whole thing.

Which means it was still CNN who put the event in 2015, regardless of how Trump told the story elsewhere, and they reached out to other sources for reactions to it, as if he made up the entire story and lied, even though CNN was the only source of "2015" in their article, which contradicts what he actually said in the video their article describes.

Just because another source exists where he told the story slightly differently, does not justify the incorrect editing of his interview by CNN.

CNN reaching out to other sources in order to react to an inaccuracy they themselves produced is still fake news by them. Because that ball keeps rolling, growing bigger and bigger, simply because Trump hasn't bothered to be super specific about the details of that one story he tells from time to time.

All that remains is that he did go to a Robin Hood event in 2011 with Melania, just after announcing his Presidential bid, after having questioned Obama's birth certificate in public, which he was criticized for globally, which proves there was a certain amount of growing dissent towards him at the time, and he has told the same story numerous times, where the only main detail that changed was how long ago it was.

All journalists have to do is to find an interview where he tells the same story between 2011 and 2015 which would prove the origin of the story was indeed the 2011 Robin Hood gala, which would prove he may have a problem with pinpointing the exact time it happened when telling the story, which is a very human thing that happens at all ages, and not really evidence of any sign of dementia or purposefully lying or making up stories on the spot.

But sadly there are no journalists, only activists. And the fact that this is what they're focusing on right now in order to perpetuate the idea of Trump as a pathological liar instead of any real criticism, just shows that they have absolutely nothing on him right now other than the upcoming election.

"Sloppy with the details" LOLOL You and KellyAnne make a great team. 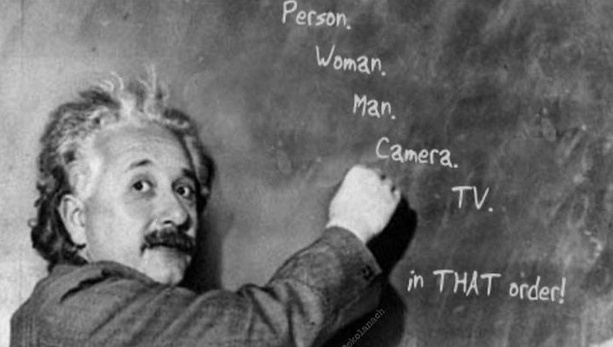 Trump is the genius we need right now. He's a super genius. Just ask him. 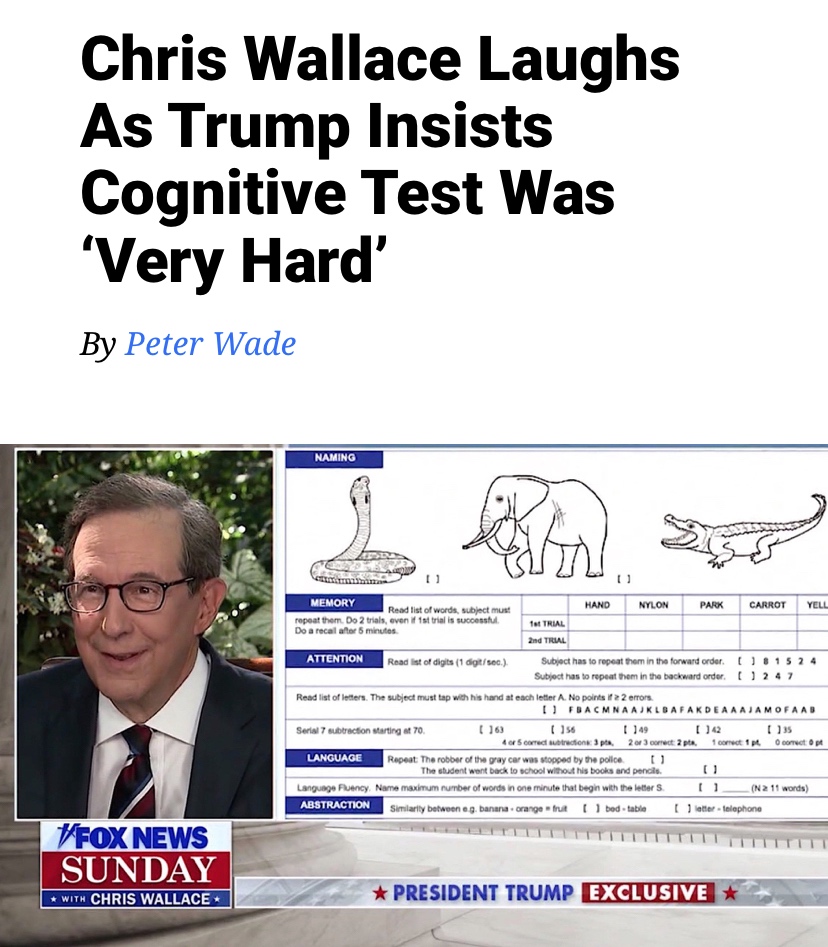 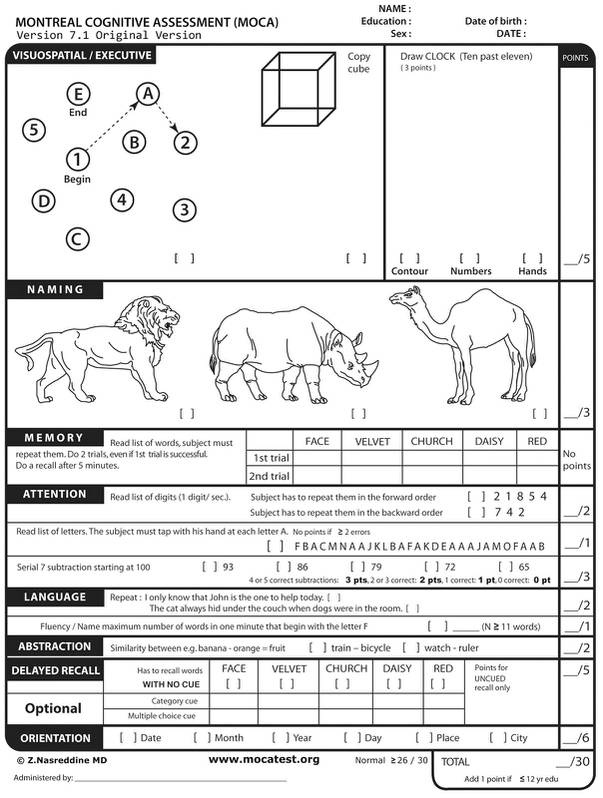 You are only proving that he certainly does not have any signs of dementia.

Which is a pretty okay thing to brag about when over 70 years old.

And very comforting considering he is the President of the United States.

Oh bigly comforting that the president of the United States would brag about his score on a test for dementia as if it was an IQ test. Tremendously comforting. A lot of people say more comforting than has ever been seen before.

He didn't just start bragging about it out of nowhere.

He has been poking at Biden's failure to complete entire sentences, which is truly worrying.

The media caught tail of the President's cognitive test when the White House doctor reported he has a clean bill of health, which was a while ago. He aced the test back then.

Now the media is bringing it back up again, making him respond with short anecdotes about finishing it perfectly.

The media is insinuating that a test that features pictures of animals on it and has "only" five words you need to memorize is an easy test, like it was made for children.

Yet it is a universally approved test which you can get in most countries, even mine, because it is effective at identifying early signs of dementia, where tasks as simple as identifying pictures of animals and remembering a short sequence of words becomes difficult.

There was a video out recently in my country of a woman who went to take the test, and she had only 29/30 right.

She failed on the words. Because they are read out to you, you do some tasks, and later the doctor asks if you can repeat them. She began to cry because she did worse than Donald Trump, and there's the whole thing of bringing a camera crew to record it and show it to the world. Despite 29/30 being a good score, which should make her happy that it didn't reveal any signs of dementia.

But that's not why she went there. She went there to prove that it was a simple test that even a child could ace, as everyone in the media is claiming, and you, and she failed.

Why don't you just go to your doctor and ask to take the test? If you ace it, great! Trump is dumb orange man and you can brag about how easy it is to all of your friends...

If you don't ace it, You'll be mentally less capable than Trump, the guy you spend a majority of your time claiming is both mentally and physically incompetent to fulfill his duties as President.

But at least you would know that there is a certain chance you might get dementia somewhere down the line, depending on your results. And you would realize that spending all day bashing a weird orange man running the country and his followers is a huge waste of the precious time you have left, before your mind starts fading away into nothing.

Will your interactions on this website be the hall of your accomplishments? Will someone look you up one day and say, wow look at him go, copying and pasting images into comment sections, securing tiny yet important victories by insulting random people online in order to convey a majority of opinion, despite the historically recorded evenly balanced distribution of political beliefs and opinions across the spectrum?

Well it's up to you man/woman/whateveryouwantobelieveyouare. I can't setup your doctor's appointment. You're an adult now. Gotta put on your big boy pants and take care of yourself.

Want to prove a point? Well go out there and get'er' done.

In that way, you are bound for success, with a real goal made entirely by yourself instead of circumstances, and people will recognize that special thing you had because of it:

Total mental decline for sure.