Up to now the twitter happy twat was excempt from "fact checking". Which was dangerous enough but somewhat understandable.

This is going to be interesting to say the least.

"Now he threatens to silence social media."  No he didn't.

He called them out for sourcing his fact checks through fake ass CNN.

Whether any of that matters will be determined at the end of his second term. There is a lot of shit stirring in the works and it's just going to time to sort it all out.

If at the end of it all if his shit was purposeless and a farce I'll be the first to eat my words.

If he doesn't get a second term I'll be convinced of election tampering. His approval over corona is low. But overall his presidential approval is hovering between the 40% and 45% mark which is your target number pre campaign.

According to aggrgates, not state polls.

"Mr Trump on Wednesday threatened to "strongly regulate" or even "close down" social media platforms."

If that is not the definition of silencing, I don't know what is. I actually edited the post before I saw your reply from "silence" to "muzzle" as I thought the alt right snowflakes might get all offended.....

hmmmm, read this a few times, not sure what you're trying to say mate?

I bet you think the rational wiki is rational.

Arguing facts with Trumptards is hilarious. They accept whatever Trump and Trumptard State Media telss them is the truth even when it is just obvious lies. The gaggle of them I work with have resorted to just straight parroting FOX word for word and ending with "But Obama" and declaring victory. A very sad bunch that, like Trump, just appears more and more pathetic. Trump playing golf for 2 straight days as the number of dead from Covid-19 approached 100,000 even though he was screaming about Obama playing golf when TWO PEOPLE had died from Ebola? Silence. Trump, a draft dodger, attacking a veteran on FUCKING MEMORIAL DAY? Nothing. Response when defending their dear leader's constant pathological lying? OH MY GOD! BLASPHEMY! What a joke Trump is but his supporters are a cult of brainwashed shitstains. 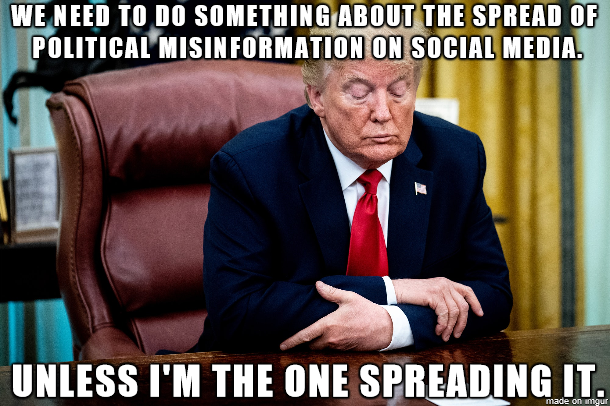 When you defend CNN you can't claim you're following facts.

Your high horse has just been slaughtered.

Defend CNN? I haven't watched CNN in years. I get all my news from foreign news sources and then discern facts. What are you on? Oh, Trumptard rule #3, deflection. Got it. No response whatsoever to your dear leader's lies and insanity. Smooth. You should be a FOX contributor.

Where is your outrage that CNN is supposedly the "official" fact checker?

I'm not answering for the shit he says. I told you, in 4 years is when I make my final judgment.

You do understand that Obama may be tried for treason and given the death penalty right? Among a whole lot of other shit.

I don't understand what you mean.

"You do understand that Obama may be tried for treason and given the death penalty right?"

Yeah. You are one beyond-help brainwashed cult Trumptard. Get back to OAN, Rush Limbaugh, and keep inside your conspiracy theory right wing bubble. Reality is obviously way too far from your view to even try to help you. No hope of you getting a grip.

This is not a US exclusive site.... i would vager there are mostly Europeans at this point, not to be a dick... but we get our news from actual media.

Not to mention it's been shown time and time again that Europeans know more about US politics that actuall US citizens, as the bullshit that happens over there has a tendency to fuck up our lives significantly!

I don't doubt that at all.

If anything it's hillarious that those that hate Trump the most are the ones that can't stop thinking about him.

It must suck to be controlled by what they hate.

Ok.... lifes to long for this bullshit!

Monkey mania parrots nothing but establishment DNC talking points that's all he's ever done here since 2016. he's not a Republican and he doesn't have stocks and he doesn't have investments and he's not expending enormous amounts of time corralling posts to the front page just to spend his time. Lol

Zero on that one toid.

I saw what you actually posted. I was willing to give you personal points for being open for once.

Not for what side you're one.

I'm sure you would be shocked to find out I'm not Republican. I want to support liberals. But Liberal representation is not liberal. Liberal leaders these days are low on openess and heavy on policy.

I support Trump for CHANGE. Sometimes change is painful, and costly. I knew since he announced he was running that every barrier possible would be thrown in his way. Everyone would fight him.

It's funny how many of his proposals are more Liberal than Liberal, And the DNC is pissed because he's getting there first.

He's the one that proposed people need to be getting cashed out while weathering the storm, and the dems dragged their feet for days before making a decision. He's robbing them of all their campaign platforms so now the only Slogan Biden has is I'm not Trump.

I stated the truth. I'm just done arguing with Spiked Trumptard Nation and dumped it. I agree with Republican thinking and I have my whole life. Biden is ridiculous. No way would I support Trump's lifelong pathological lying, con artistry, and scams though. Ever. If you don't see it, you are beyond help.

"Trump for CHANGE"????? Jesus. Yeah, he is well on his way to draining the swamp and pumping in sewage. His handling of the latest crisis has been a disaster and he is following it up with more lies. Leadership? Trump is a buffoon. He's been terrible for this country.

It will be done regardless.

A crowd of people are stupid.

If you're in a no win situation, it's better to feed them shit. Especially the media.

What this president shows me (personally) is heart.

If I'm wrong. Then that's the way it goes.

The worst thing anyone can do is live with a fear of being wrong. It only leads to indecision. And nothing changes.

I feel also people are prejudiced against the rich, and that is only a reflection of jealousy and insecurity.

I'm not a rich man. I grew up poor, I used to hate seeing what other people have and I don't.

And I realized, that life is what I make of it. Not what others tell me.

In the end, those that succeed think very differently than those who don't. Their decisions are often strange when in the making.

But in the end in retrospect it often  feels like things should have always been that way. But almost never before, or during this process.

Who is silencing free speech?

Which one of these two is terrified of criticism?

LOLOLOL 90% of the Trump 45 MAGA I Never Lie video's comments are from Trumptards sucking off their dear leader. The Biden video would be nothing but Trumptards spewing their cult venom. What's your point? Is the Doll Hands Donny video blocked? Is it marked with a crazy request for the truth? No. Anyone can watch it. Anyone can watch idiot Biden's video too.

You are gone. Keep praising your dear leader, drink bleach, and look at things from the other side.

Garbage. What a loaded turd of an article.

It isn't calling Trump the greatest president in history. GARBAGE!

Step outside your Trumptard bubble just for a few seconds. All of Trump's lies are the truth to you. THAT is what's sad.

Your going to give yourself a stroke with your angry racism.

I'm picturing you and daft in the old age home, wheel chair bound with self soothing rocking and spilled I.V. nutrition.

The only words that remain. "TRUMPH TRUMPH T-T-T Trumph!"

You are either deep in a post-stroke oblivion or just a lifelong imbecile. Period. Holy shit you are one sad character.

Whatever you say sugar peach. Would you like your apple juice now or after your nap?

Bet you make your dad and his sister proud of their son. 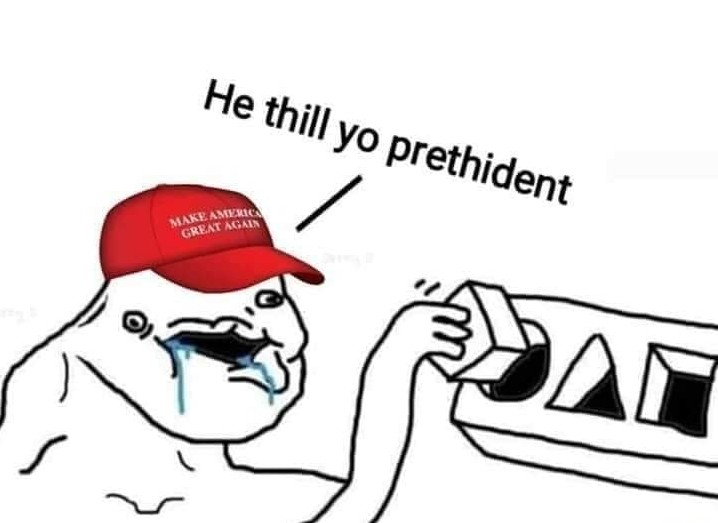 You are the last person on Earth I would expect to wear a Maga hat. Welcome to the team!

what are you going to do for the next 4 years as Trump is still president? Waiting for your mental breakdown.

Yeah. Another 4 years of the great leadership we've had. There would be a complete breakdown for sure. We are in the middle of one right now. It's not Donnie Doll Hands fault at all of course. Hannity said so.

Let's hope the insanity of the Trumptard era ends with 2020.