Trade Wars are Easy to Win!

Goes on and adds insult to injury, calling China a weakened nation and compairing it to Iran, haha holy shit what a guy.

So far Mexico, Brazil & Russia are winning the trade war.

All 3 are increasing soybean contracts with China and Russia will also gain more access to the Chinese LNG market.

We are pleased to announce that Former U.S. Secretary of State Hillary Rodham Clinton will be a featured keynote at our #FireEyeSummit in October! Secretary Clinton will engage in an intimate Q&A keynote discussion with Kevin Mandia.

Sweet we can hopefully rid this country of soy. So fucking bad for you.

Not sure you know NOT exporting millions of tonnes of soybeans works. It means you keep them, or at best offload them at huge discounts. I hope you like tofu & soy lattes.

I doubt China will weaponise rare earth exports unless things escelate a lot. They are encouraging the threat hype a little though & the threat alone causes trouble in the US economy. It kinda weaponises the sensational corporate media & stock market reactions. All they've done is have Xi take a stroll around a rare earth plant & released an opinion piece in the CCP newspaper. Sun Tzu would be proud.

maybe but they really could, specially as they now have most of africa too, which is the second biggest producer of those elements.

It doesn't make economic sense to limit rare earth exports because of how the global supply chain operates. It'd be an own goal (at this stage).

The idea that others could step in and fill the demand is not right in the short-medium term. It takes years to increase supply & 10+ years for a new mine/processing plant to become operational.

My guess is that they want to phase out of being the major world supplier of RE so this threat strategy is a double-win. It seems to be working [link]

you've explained without explaining? on the contrary, limiting rare earth exports would give chinese manufacturers a competitive edge they've been trying to get for years. both alibaba and baidu started making their own chips since last year, less competition would help.

the mines are already operational and producing. what china has done is make sure these african mines sell to china, and many of them are already owned by china or under their control or lease.

that's absolutely not the case, as evidenced by how much effort they've put into securing supplies from africa even when they already have their own. your own link says china is looking to restrict exports of re.

Besides Xi visiting a re facility last week, yesterday the CCP put out this opinion piece: [link]

Those are the strongest indications China is looking to pull the re lever.

You make a good point about their opening re mines in Africa. I think it's pretty obvious they've intentionally cornered the market. I made a wrong assumption there but I do think they'll reduce re extraction in China soon just because it's so toxic. That doesn't mean they want to let go of their grip on global re supply though, you're right there.

Baudu/Alibaba (same company) are not on the same level as HiSilicon. The curent leading manufacturers are based in Taiwan (TSMC) & S. Korea (Samsung). All of them rely on a global supply chain of tech & patents. TSMC works with HiSilicon for the Kirin chips, which use ARM (Japanese-owned UK company) for core architecture.

The time when a country could be self-sufficient producing cutting edge chips is long gone but we may see a trend back towards that scenario if this cold/trade war drags on. I'd guess it would take 10-20 years for China to become self-sufficient #1 chip maker, so it doesn't really relate to Trump's term so much.

The 'competitive edge' thing is already happening. It's a product of R&D resources & education. China outputs 10X more engineers per year than the US, about 6X more scientists & spends WAY more on commercial high tech R&D. I think Huawei alone spends more than all other telco companies on R&D. Huawei has like 85k people just in R&D.

One more thing to note: it takes 500 lbs of re to build an F-35. Messing with that supply goes beyond commercial & becomes military. Just another reason why China would not want to go there, just over some trade talks. We're not at that point yet IMO. It's possible they'll put a small tariff on them if Trump pulls any more stunts. We'll see.

This tweet from the editor of the Global Times seems to suggest China may actually do something about limiting re exports:

"I saw some people still don't believe China could restrict rare earth exports to the US, deeming the move will hurt China as well. They just don't understand China, including how information disclosure works in China."

"Based on what I know, China is seriously considering restricting rare earth exports to the US. China may also take other countermeasures in the future."

I'm still learning how info disclosure works there, I know the semi-official statements come out of the Global Times & that warning shot I linked above suggested that they could.. this guy is suggesting they are seriously considering it though!

problem is when you look at the meaningful part of economies, china is about 30% bigger than the US. the US economy is mostly just services, so without a good deal on imports of actual goods, the rest won't be able to function.

That leaves a customer with $1,000 less to spend on other products.

How does this scenario stimulate businesses on US soil?

If you are rich and cashing in right now, everything is going to be fine for a long time, regardless of what happens. If you are just riding the current wave, get ready to hit the rocks.

Are you kidding me? the money stay's in the economy and go's to workers like glass and chip manufacturers they employ ppl to, every bit of hardware will be made in the US so plenty of work for everyone, like i said this is only in the long run, and where did you get the numbers that an IPhone would cost 2000? the only thing that can happen to stay competetive with other phones is that Apple makes less on each unit, or the manufacture them a little cheaper.

The $2,000 is an estimate based on the difference between labour cost of $25/hour as opposed to the current $2/hour.

High tech is a global industry these days. Here's a breakdown of where the money goes for each iPhone - only $8.46 stays in China but the entire $237.45 is counted as an export from China->US: 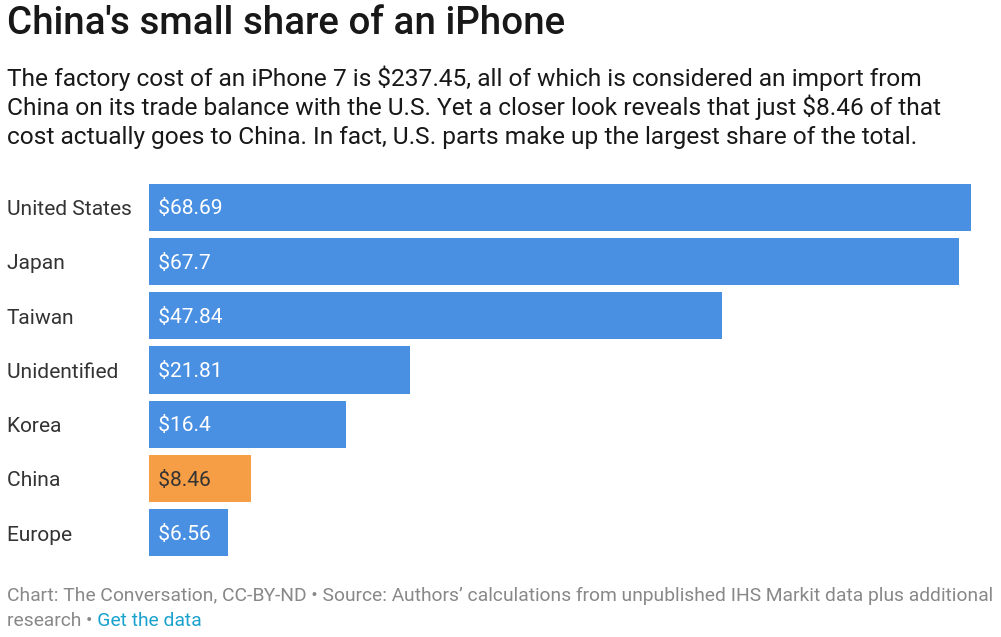 the money stay's in the economy and go's to workers

The US is part of the global economy & US companies make way more in the Chinese market than vice versa. The money they make goes on other things like staff for sales/marketing, admin, finance, even things like couriers, coffee makers etc. They're all jobs that need money from somewhere.

Any manufacturing jobs you try to 'bring back' will be uncompetitive unless they're subsidized. It's probably better to spend more resources on education & R&D to create new technology. Intel currently employs 6,000 people in R&D in 2 countries while Huawei employs 80,000 people in 16 countries. That's employment that creates future employment. I think that's the way to go rather than focussing too much on the hadware manufacturing/assembly.

This entire trade war started when China was trying to blackmail foreighn companies in China to give up technology, that 2 dollar per hour labour cost was just a spiders web or it turned out to be an advantage they had on those companies, they are not happy with 8 dollars a unit, so hence the trade war, we will take the 8 bucks and employ our own ppl, and these 2000 dollar phones will put our own kids trough school, it is a luxury product anyway, and those numbers you pull up are propably bogus for some reason.

Nobody blackmailed anyone. Most of the companies who go to China do it so that they can gain access to the Chinese market, not to export anything. All of them willingly signed agreements. There was no threat involved.

The numbers I showed you were on the low side of the ones I've seen. Another source says $11 stays in China, ~$240 goes to foreign companies & ~$350 goes to Apple. I think that may be for a latre model iPhone.

The US is waging a trade war with tariffs but the real concerns are nothing to do with trade. The main concern of Trump seems to be that China is gaining ground in high tech. That is not something you can stop & if you try to slow them down with things like tariffs it will backfire.

If the problem is high tech then re-work how high-tech cooperation works in a bilateral deal. Put more money into R&D & STEM scholarships.

Here's another graphic for perspective: 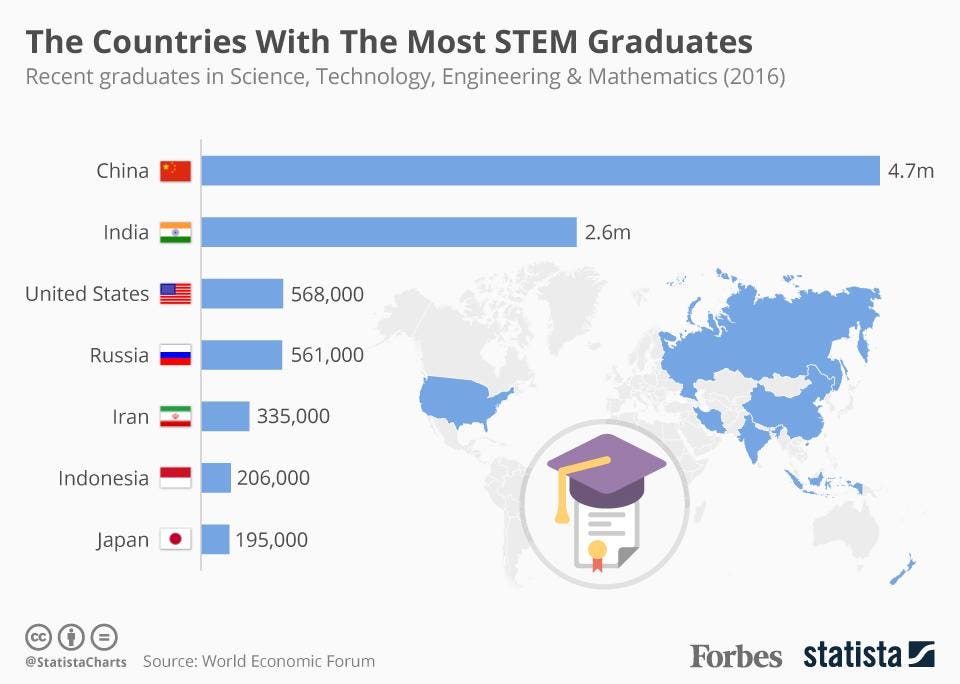 All countries who industrialize do it by borrowing tech. The US did it by stealing cotton milling factory designs from Britain - state secrets at the time. The Japs did it by copying Ford's production line techniques. Etc.

The only nation to really innovate their own industrial age was Britain but they were exploiting half the world at the time & had child labour & all sorts so it wasn't the most ethical situation either.

No there where actual reports of american company's being economicaly blackmailed like AMD and such ( not local) to give up certain technology to be able to remain in China most of them make the reports anonimous out of fear of retalliation of the Chinese government.

what america does now China already did

I can't find any info about AMD being economically blackmailed.

The closest info I can find is this article where a Chinese firm gave them some much-needed cash in order to license x86 chip production in the Chinese market: [link]

Is that what you're talking about?

If yes, the only dicey thing there was how they skirted around US export laws & Intel patent conditions with the way they structured the joint venture company that produces chips. It seems to be legal. It led to AMD getting a ton more money through licensing & may have saved the company & the chips are only sold on the Chinese market. It was Intel who leaked the info because the x86 is their patent & they aren't happy their competitor is using it like this. Intel is not exactly a fair trader, they've been using their leverage to suppress AMD for a long time.

I still think your concerns are misplaced. China is investing in quantum computing from the ground up. In 20+ years none of this wrangling over some market access/chip designs is going to matter. It's education & R&D that will secure your country's technical prowess in the future. That's real "national security". The US has to figure out a way to compete with a country that's outputting 10X more STEM graduates per year. It can't keep treading water & expect to stay on top.