Mariana Vishegirskaya - a key witness to the widely publicized incident at the Mariupol maternity hospital has punctured the official narrative of a Russian airstrike on the facility, and raised serious questions about Western media ethics.

She's corroborated how the hospital had been militarized by local Ukrainian forces - this had been reported as such days earlier by witnesses as some of us quickly found out when western media went ballistic on this story. 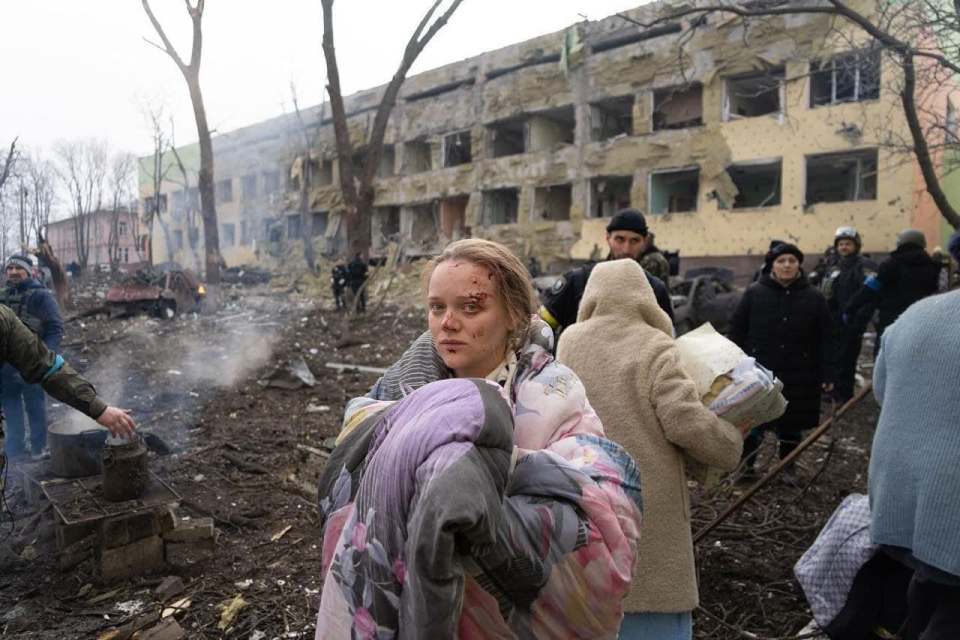 Her narrative is by no means shaped or managed by the fact that she was 'evacuated to russia' and is in their 'care'...

the hospital had been turned into a base of operations by local ukrainian forces - this is corroborated by multiple witnesses. western media completely ommitted this when it flooded the world with this story, even though it was known at the time, & they lied about a bunch of important details according to their preset agenda. they've done it on a number of occasions during this conflict.

it matters if you care about the facts.

Imagine cops using that excuse: "He ran into a school after robbing a bank so we shot up the school and killed a bunch of kids, but its OK, because we got the perp".

cops and military operate under a different set of rules

Right, its ok to blow up a hospital because there were a few soldiers in there asking for food and using solar panels. I dont care what the "rules of engagement" are, it is still unethical.

Anyways, Thought you were going for the Ukrainians blew themselves up angle? Not this time? Come on man, make up your mind!

technically yes, if it's being used as a military base.. but that's not what happened. There was an explosion outside the hospital that damaged the building - blew out the windows & whatnot. We don't know that the hospital itself was targeted, or whether the explosion was from guided or unguided rocket.

"Thought you were going for the Ukrainians blew themselves up angle?"

there's no evidence of that afaik. I saw that chatter somewhere but didn't repeat it. The photo-op outside the hospital did seem sus tho. Most likely a crew went & recorded it for propaganda & distributed it to western "free press" who jumped into action. It looked how a white helmets false flag operation goes but that shit takes a bit of time to unpack & figure out wtf happened.

"I dont care what the "rules of engagement" are, it is still unethical."

is using a civilian hospital & surrounding area as a military base ethical?

Means nothing. If you are claiming the Ukrainians bombed themselves then you better have some better proof than a woman saying she didnt hear planes that could be miles off. It was probably a missile or a huge shell from a destroyer. That crater it left was fucking massive.

yeah that's the point, one of them at least.

western media widely reported it as an airstrike without even knowing what it was.

they jumped on the story & used it as atrocity propaganda - with misleading info that weaponized people's empathy for a political agenda, covering up that there was military there - a glaring ommission that had to be deliberate & that changes the entire nature of the story.

Again, doesnt change the nature of the story as they shouldnt be bombing a fucking hospital in the first place regardless if there were military there. The USA got tons of shit on them for doing the same and no one defended that shit cept war loving propagandist. If your jump off is flawed it down matter how well you ran the race. I am willing to forgive the lamestream media for calling it an "airstrike" without knowing what it was exactly. You have to paint a picture for the dummies who listen to them. You are so concerned about a stupid detail such as that you are missing the main point, you cannot bomb hospitals.

Imagine if Ukraine started bombing Russian hospitals and said it was fair game because some Russian soldiers were there. People would still be outraged.

the details can be important when you're talking about serious shit like this & the hospital in Kunduz that the US bombed was a vastly different case to this incident.

firstly you need to know that all hospital locations are known to countries like US or Russia & they don't bomb them because it goes against the rules of war.

the Kunduz case was a deliberate bombing of an active Doctors Without Borders hospital & it killed 50 people & the Pentagon has admitted it was deliberately targeted.

in this incident nobody was killed & the hospital wasn't targeted, it was hit with some splash damage.. I don't know that Russian forces were directly involved or if it was the DPR militia or what kind of munitions were used but the media said "Russian airstrike" which implies it was a deliberate targeting of a hospital by the regular Russian forces - a blatant lie that twists the nature of the incident from the start.

this incident didn't directly kill anyone but the picture the western media painted was way off the mark & made it sound like the Kunduz case. It was nothing like it.

US deserved a "lot of shit" because they committed a blatant war crime that killed 50 people including medics & civilians. Russia hasn't committed this kind of atrocity. You're acting like they did because you don't have all the available info - this is a deliberate reaction that the western media was going for when it launched the propaganda blitz.

by the time people like me get some more information it doesn't really matter any more in terms of convincing anyone & people like yourself typically dig their heels in due to the outrage etc. I don't really care too much but like to put things on record, maybe you'll at least give yourself a little space to breath before believing everything the media says next time, they lie & manipulate consistently. Weaponizing your moral outrage for their political purpose... in the end they have you supporting the prolonging of this war when that's the opposite of what you should be supporting if you care about the well-being of Ukrainians, as you seem to. Same goes for the root causes of the conflict. This shit matters if you don't wanna be a sucker.

I dont pay attention to shit like this, I ignored the articles about this incident because I knew there would be spin on it and might not be true. I didnt really care until you posted this, then I started digging into it. I read mostly shit that was pro-Russia and started from there. I am very well aware of propaganda, thank you very much. Vids and pics dont lie, people do. Like I said, your game is weak. If you are going to debunk something like this then you better have some more proof than just a woman giving an interview.

if your only objection is the "debunked" in the title, I suppose that's fair enough, kinda

her testimony is evidence that debunks the "airstrike" claim that was flooding the media at the time but it's not some complete debunking package of facts with a clear story that it tears apart.

I happen to think the "airstrike" claim is quite important, you don't seem to, whatever.

lazy choice of words in the title I wrote? I can live with that.